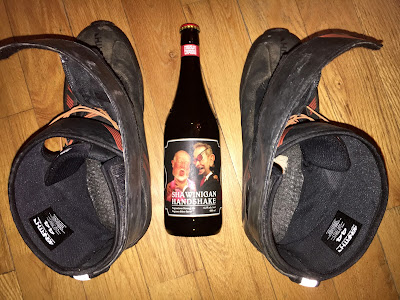 Greetings from the past. This should be posted at the end of my first stint on a new job or after the first week of my second stint.. . I don't know if I am working two straight weeks or one due to training. So I have no idea when this will be posted. Are you still with me? That's great! Other changes to the Beer Friday spectacular will be two posts per month instead of three as it has been all last year. It was more fitting to do three in camp to post every Friday and then my last day but I don't think how that would make sense now. It might even come to being posted once per month.

I have no idea what will happen, I am doing these ahead of schedule as I have done all year because I don't know what is happening.

Now that I have lost the entire audience we are doing a beer named after a famed incident when a former Prime Minister of Canada choked a protester in his hometown of Shawinigan Quebec. It was quite the spectacle as he choked him and knocked out a tooth and started going after another before the RCMP went after the protesters. The bottle which features Jean Chretian and for any reason only God knows why our beloved Canadian hockey dickhead, Don Cherry. I would honestly pay money to choke that man but that's just me.

At 6.5% this one pours a murky golden beer. It was a bit deceiving from the dark bottle as we thought it would be a dark one. That move made a couple interns pass out. Well played Trou Du Diable... Well played. It smelled of dank peach with a splash of citrus. With being a high alcohol content beer this one hides it well. The first sip was pugnacious which it even tells you on the bottle (how about that?). Late Fall grass and old fruits from your Grandma's garden round it out. All in all, this one is very good despite having to look at a cartoon picture of that douchebag on the bottle. 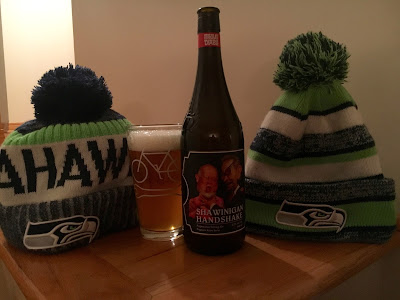