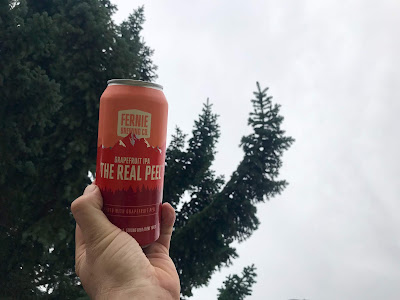 Fernie Brewing again. Cause of last weeks disaster we are looking into this brewery's best interests and as everybody knows once they are featured on here the coming success is imminent.

Ride updates. We are still a ways away from anything that would resemble a ride. The pain is pretty much gone but there is still a sign of the nerve still being irritated. We have less than a week and a half until work comes with a doctors visit preceding that which will tell my fate.

A fellow in the neighbourhood has been riding an E-fat bike around the local roads and paved trails here lately since the weather improved. I see him riding warp speed on one of Beaumont's many hills and I have found it over the top entertaining. 'Is this my future?' A chilling thought as I drive by. It would be fitting after all the bad things I said about E-bikes in the past to have to buy one. Seeing the speed this guy goes has made me dub him 'Fast Fat Bastard' the hero this neighbourhood needs!

We poured with little incident, I say that cause it seems we fire some executives, beer pourer personnel or lowly interns most often during the pour. I would guess it's the high stakes pressure that everyone is under that makes these pours so dramatic. A very tasty looking grapefruit IPA looked sharp in the glass. It was golden and inviting. A one and a half fingered head sat on top and took a very long time to dissipate.

We tasted and a strong grapefruit explosion happened followed quickly by the distinctive IPA bitterness. A yeastlike breadlike flavour is found too. They use grapefruit peels in making this one and it comes through in the taste quite well. It's easy to say this is not for everybody but after a few sips it does grow on you. 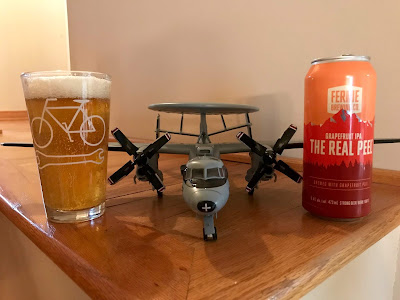