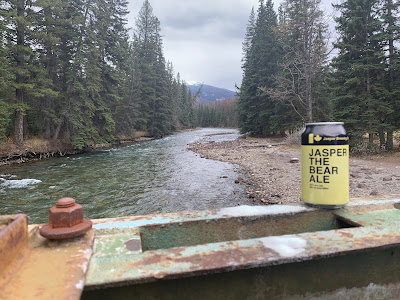 Beer Friday baby! Yes I know it's Thursday kids. Are we not used to this by now? Sorry for the lack of riding it was mine and Mrs Lonebiker's 20th anniversary, a sad milestone for two nineteen as it seems the proper cool thing to do now is divorce and remarry or date. No I'm not slamming people who have been through marriage shit. I get it. I just got lucky is all with Mrs Lonebiker. A fine lady that doesn't get the recognition she deserves on here. Or does she? Ahhh.. Probably not.

Whatever. Mrs Lonebiker is pretty epic. Yes I would choose her over any bike and trail any day. Oh my God... That might be the most romantic thing I have written ever.

Jasper Brewing which resides in the Holiest of Holies. Jasper National Park. My favourite place in the world. We spent the last two days there doing anniversary things. I did pick up a mixer of Jasper's finest. Jasper Brewing's, Jasper the Bear Ale. A blonde ale with what they claim flavours of honey. How appropriate.

Cause bears... Yeo get it now? Can you not stay on the same page with me as I write this whilst you read it? Come on man! Get in the game!

We poured and it gave the usual golden colour that a good beer should. A four and a half fingered head (yes, the pourer fucked up. he's fired) stayed around for a short cup of coffee before it took off. The glass was almost hypnotic as I stared at the bubbles rising up smitten with travel wear from a long but good day that ended in the vehicle for hours. A smell of honey did emanate from the glass which made me drool for a minute or two while Charles the intern set up the typewriter.

The first sip was a watered down version of what I thought was going to be incredible. The second sip was much of the same. I know blonde ales are supposed to be weak so I sipped some more and let the coriander decide. I could get the coriander and honey, those are evident in the tasting. Perhaps this is the wrong beer to have after a long day of travel? This beer finishes off very dry which adds up to a boring review as no aftertastes and surprises stay hidden. Like a good proper beer should (I guess.) 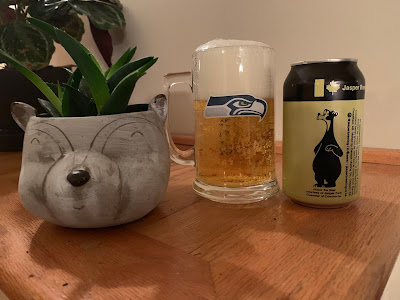