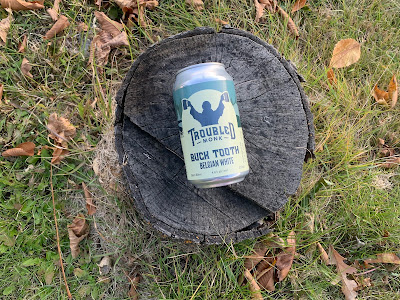 Days off. Which started Tuesday this week have not had the wonderment of 2 wheels in the woods yet and that is a sad realization as I sit here typing this out. With both summer bikes out it would be fat bike territory for the time being which still makes no excuses for not riding. Is it coming off nights that spearhead the laziness? A very probable scenario as most weeks when coming off nights the rides do suffer, this switch over however was one of the easiest ones I've had and I am now a fully fledged white milk drinking day person. Not that red eyed monster whom I was just up north living on five hours of sleep a day.

I'm not trying to make up excuses. I guess I'm just venting in a way. I was supposed to ride today but some last minute bullshit had scrapped the ride. It was then when I called the beer team in so we could distribute some sort of Lonebiker content.

Enter Troubled Monk Brewery for another test run. A large gift pack was thrown my way from Troubled Monk (the gift wasn't from the actual brewery but I accept gifts of beer from local breweries in an effort to sway my opinion.)

From Red Deer, the brewery is holding on with all the others in a now very competitive craft beer world. Some of these breweries won't be around for long so the truth will be told in the quality of the beer produced. You can thank all the man bun's out there for this insurgence of craft beer breweries which will implode soon sadly...

We poured and our tester mug was filled with golden awesome. A small one fingered head came and went like a crooked politician getting out of church. I could get a slight aroma of wheat malt. The first sip showed it was a simple beer for one who would like watching curling and making puzzles. It didn't deliver what I had hoped but for a Belgian wheat ale it was just doing what I suppose it would do. For what this beer is supposed to do I would say Trouble Monk delivered. The taste is quite full of earthy grains which seems watered down but that is just the way these beers are supposed to be. 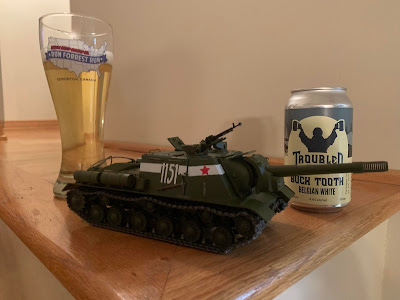