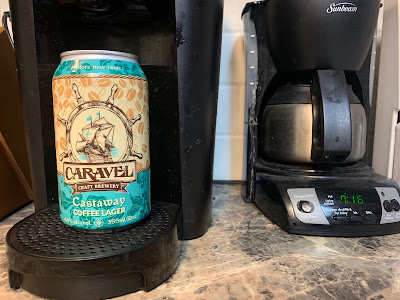 Good morning. For the first time in Lonebiker history we are bringing you the first ever beer review done at 8 am in the morning. Yes I know what you are thinking. Maybe there are signs of a serious problem at hand, no I didn't wake up at seven, eat breakfast and commanded the beer review team to be here. My week of work is done from night shift. A fun part of the industry I am in where work will go twenty four hours a day three hundred and sixty five days a year. It just doesn't stop.

So get your finger off the twelve step hotline. We are just going to enjoy an after work beer is all. My night is now your morning until now. The rotation is over. No more nights till the end of the month.

I hope I stated my case clearly.

As for time off. A rather bad cold seems to be brewing which almost sent me home a couple nights but I sucked it up. I am quite melancholy as a dump of fresh snow has graced our valley and I am hearing things are quite epic out there but I could be on the sidelines for a bit.

Caravel brewery located close to the Calgary airport has won several awards including the one we have in our grasp. Thank brethren member Kent for the donation. I tried to find out if this is Calgary's version of Ally Kat but you know what? I'm dead tired and I just want to get through this now that I started it.

Yes, the fatigue is hitting me quite hard right now.

Lets pour! The irony of this being a coffee flavoured beer is quite uncanny considering it is being done in the morning. Some of the interns think this was set up that way but it was a random beer taken out of the beer stash, I swear!

It poured a dirty golden hazy colour. At 4.8% this will be the perfect morning pre bed treat. It smells of coffee with a dried Fall leafy essence.  The taste is a bread like, almost doughy. Hints of coffee adorn this muddied water brew. What would a coffee lager be without bringing in tastes of coffee? Other earthy tastes compliment this one. Yeast and other earthy tones that I cannot quite pinpoint in my amateur attempt at reviewing beer round this one out. This would be a fine after dinner beer sitting by the fire with a good book. 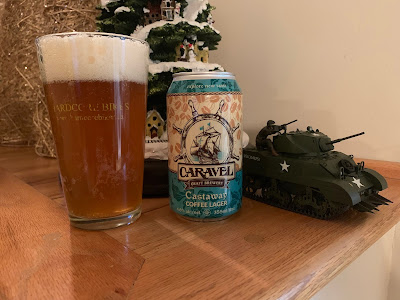