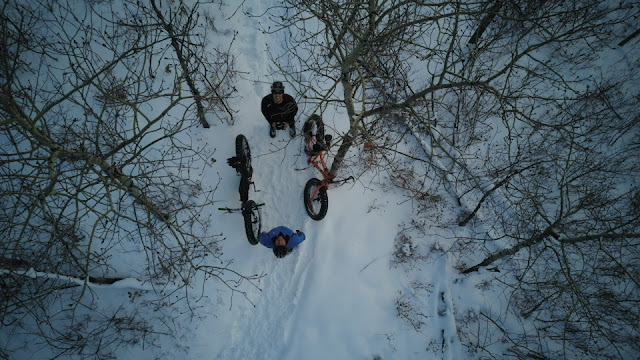 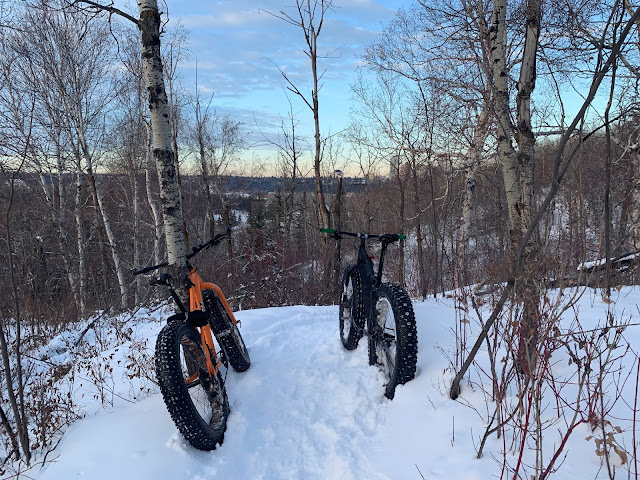 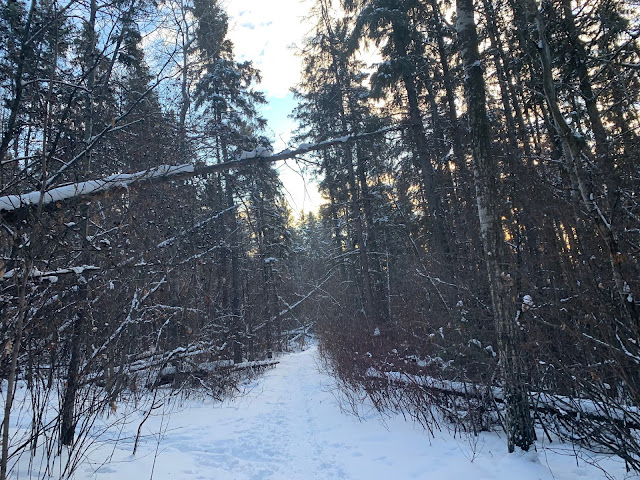 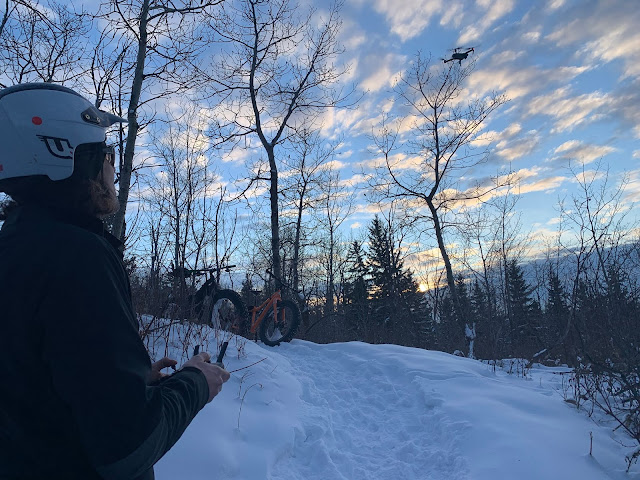 A meet up with Mr Steeves in the Fort Edmonton parking lot for a late day ride on some pretty shitty snow conditions. After experiencing the trails yesterday I thought today things would be a bit better but whoa man... I was way off.

The ride featured quite a bit of hike bike and a bit too much residential riding. Too be honest it was way too much hike a bike for mine or Kent's liking. The residential riding was our choice given the snow conditions and the incredible deep freeze that some areas of the river valley were.

We headed eastward along the equine centre and disappeared into the trees. The trails in the area were somewhat rideable and we eventually found the route up via Sprite. We found Raygun and rode... well skidded and slid down in an uncontrolled manner. A very narrow swath of trail was packed and if you off centered a little bit the snow would suck you in like some sort of blob in a bad 50's horror movie.

One of the highlights was the drone Kent brought. A self confessed aviation geek myself and am still quite surprised I haven't hopped on the drone wagon. We played for a little while in an open spot on Raygun and eventually rode on. The plan was to pull it out in a better cleared area so it could chase us with the tracker. Pretty fucking badass.

We never played with it again.. Some areas in the valley just chill you beyond all means. In particular Mackinnon ravine where we rode through on our return to Fort Edmonton and the thought of stopping was out of the question. Why we passed the Talus dome and rode right by. A Lonebiker first!

Before Mackinnon we tried to navigate a proper way to get back to the trail after the genius city shut down everything in the area travel wise for the bridge construction. There is absolutely no connection on the north side of the river until February 15th. It is pure bullshit. We ended up illegally and dangerously jay walking groat road during rush hour to get by.

Once out of the deep freeze known as Mackinnon residential roads took us to Mackenzie Express where I froze even more on the long effortless downhill plunging us deep back into the valley. We road Laurier cold and a bit fed up with the snow, the cold and the thought that work is looming soon for the both of us.