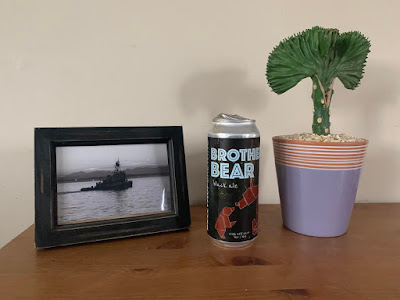 **This does not count as an official beer review** 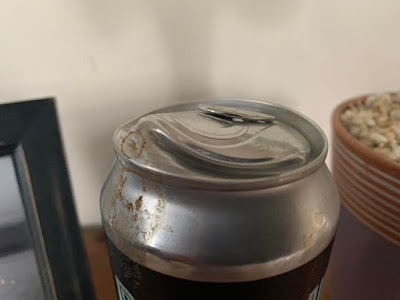 I mean.. Just look at the can kids. This happened last set of days off when this can suddenly ruptured in my den as I sat there leering at train pictures on the internet. No heat or cold involved. This guy just ended things before anyone had a chance to talk him out of it.

We are taking this opportunity for an update. You may not have heard but apparently there is some sort of deadly respiratory virus going around making people lose their minds so they boldly started hoarding toilet paper.

With that being said, I don't know how much longer my job will last. Normally a scary situation to be in but almost the whole world is going through the same thing, so in a weird way I feel better about things as far as work goes.

We just finished a week of nights and normally I would be planning bike rides and thinking of general ideas on getting outside to see the world right now. Guys, I have to be honest. I will feel like a giant asshat if I do go riding. I know the singletrack should be quiet but now all the minions who have nowhere to go as the malls are closed are now plugging up the valley as I've seen on social media.

Do I ride? Or hide at home?

I want to ride a bike really really badly. Not gonna lie. What happens when I encounter someone on tight singletrack? I know there will be people. That's a guarantee. Do I stop my bike and run into the woods keeping a respectable distance? A very noble idea to solve that problem (pats self on back.) What about groups of people? There were tons on the Mill Creek singletrack last week before work which will be a huge problem if they are there again.

I understand people are bored and need to get out of their house but why are they congregating in large groups? I know the areas in the valley where these videos emanated are the popular areas which attracts all the knuckle draggers so I guess I'll keep away from those areas.

Well there you have it. You might expect ride write ups this week unless things change.

Well I opened the Brother Bear and it surprisingly looked descent. The one fingered head was a surprise as I was expecting nothing. Let me sip.. hold on.

We will do a regular review possibly tomorrow. Sorry Brother Bear. We will find this and do another one in the future.

In the meantime. Please respect the Doctors telling people what to do right now. They are in charge. My advice for the pandemic. Stay off social media and stay very far away from those horrible 24 hour news networks. That will do nothing but make you feel like garbage. White forty year old women have completely lost their fucking minds, so social media is a bit of a downer.

Don't worry kids. The world will have it's humans back in tip top shape soon so the humans can keep destroying the earth.