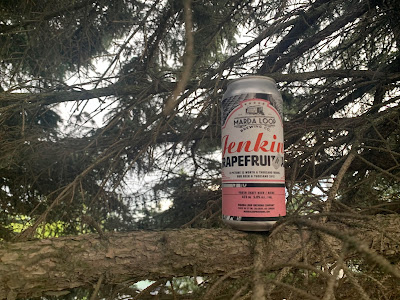 We knew we would get this out if we really tried hard. It was literally last Friday on a Beer Friday that the cover photo was taken and preparations were made to start a review. Hell, I even had the full beer review team here and had things set up to knock yet another one out of the park.

When suddenly. I lost interest and sent everyone home.

Don't worry, that is perfectly normal behaviour when recovering from nights. I remember being quite fatigued that day and arguing with Mrs Lonebiker about my poor current state at the time. Mrs Lonebiker insists that I fake being tired for sympathy. I know what your thinking. "Fuck, you guys have probably been married a long time." Which I guess is true but when do I ever pass up a chance at a beer review? Well, how about that, Mrs Lonebiker has nothing to say about that now does she?

Marda Loop Brewing who are located in Calgary have been around for a bit. Well, truthfully I have no idea. It didn't really state on their website. Hold on a second. Let me do some digging.... Sorry, Couldn't find nothing. I Googled the name and the brewery looks like it takes it's name from a neighbourhood in Calgary.

It poured a dirty golden colour with some trace amounts of lacing coming down the sides accompanied by a one and a half fingered head. I will be honest with you guys and I will let you know this is the last of a six pack I had since last set of days off. The previous five we're had either barbecuing or simply being a piece of shit following the wife around the house looking for some sort of attention.

For the official review it was poured. The previous five were enjoyed straight from the can, so this done in test settings will be a lot more fruitful in getting what we need out of it. The previous beers were quite enjoyed if you were wondering.

My nostrils were filled up with a nice brush of citrus which on a beautiful hot night such as tonight it was refreshing. Well.. Not really. I like to play things up a bit I guess. It did smell nice though, but refreshing? Come on man. To me sticking my head in a mountain stream is refreshing. This was nice but nowhere near as great as the latter.

It tasted of grapefruit not surprisingly. The beer was quite nice, the obvious citrusy grapefruit was there and strong but the overall mouthfeel of the beer was pleasant. A very slight IPA kick was there in the end to remind you that you are a man drinking a man beer, this ain't no sissy fruit alcohol drink. No sir.
I know it scores lower than you'd think but this is a nice beer. find it. 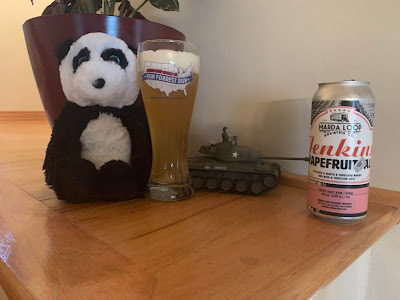