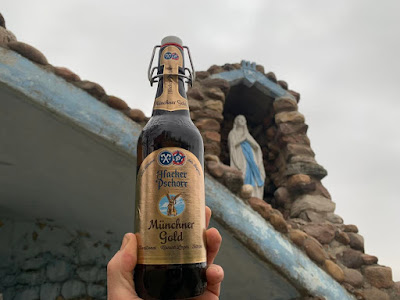 Finally! A return to Europe for Beer Friday.

We started getting letters. Well no, we didn't. With the abundance of craft beer breweries here we are oversaturated with different beers and do seem to get lost in the fold at times. Yes it may seem like I am putting it across like it is a bad thing but it is most certainly not.

Guys. I assure it is quite awesome.

So where in Europe does this little guy reside? Well if the name of this one didn't clue you in than I might have some news for you. You might be a bit stupid. Yes I'm sorry to let you down but it does say Munich right on the bottle. Well it is spelled out in it's proper German dialect which I attempted but I could not get those little dots above the U when I tried spelling it out. Yes I am sure it is an easy thing to do but with the beer review team arriving in their new high speed mach suits after parachuting out of an overflying Hercules any second I have better things on my mind.

As any other cool vintage European brewery this one was probably established about nine thousand years ago. Let's check that out. Oh my Lord. It was started in 1417, That's over 603 years ago.

This one features a well thought out and cool beer closer and sealer built right into the bottle.  Opening it is super cool as it gives a little pop to tell you it's fresh, after opening you can close it and hold the beer upside down and not a single drop will spill. I mean really! Oye, Zee Germans!

Besides the awesomeness of the bottle it poured a heavy head, probably cause everyone was a bit freaked out by the former writers head exploding right here at the lab.  A generous five fingered head quickly dissipated to about three for the photo and by the time I brought it down there was slight lacing on the sides with a slight milky cloud on top.

A good pilsner type malt is evident with freshly cut wheat in the aroma department. This hard lager comes in at 5.5% and tastes quite great. The recipe for this one dates back to the breweries inception which makes one want to follow suit and have their head explode whilst drinking one thinking of that super cool fact.

Tastes you ask? This one gives you grainy malts with a heavily grainy bread. Yes I am emphasizing about the 'grains' but don't let that scare you. In a weird way to say it, if you can imagine a scene on a nice hot summer night at a somewhat popular beach with an ice cream stand. It's late in the day and people are tired, the smell of the cones resonates slightly through the area mixed in with the humm of an air conditioner and generator. If you can taste that...?

Oh farts, do I need to go in for a drug test?

I could have just said ice cream cone, yes this has hints of that flavour. It does have to have a soft vanilla ice cream in it and you have eaten almost all the ice cream and cone and are down to the last three bites.

You'll get it if you taste this beer. trust me.

It's quite good.The perfect beer for a cool Albertan night like this. This one is  absolute perfection for the Fall. Hence Octoberfest.

To the brewery, hats off. 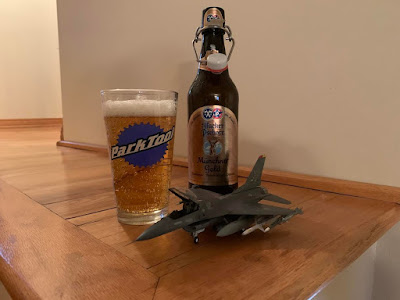