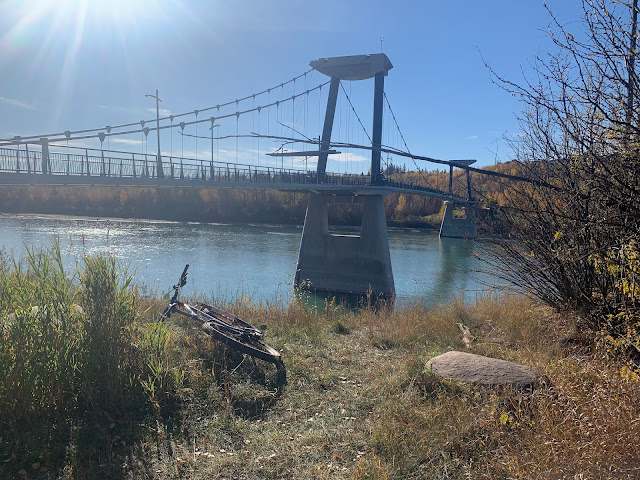 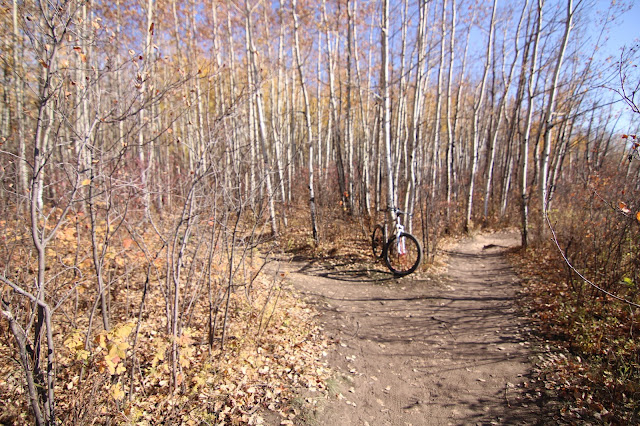 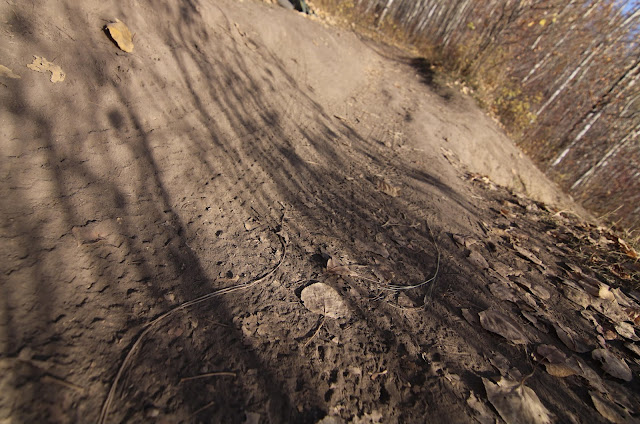 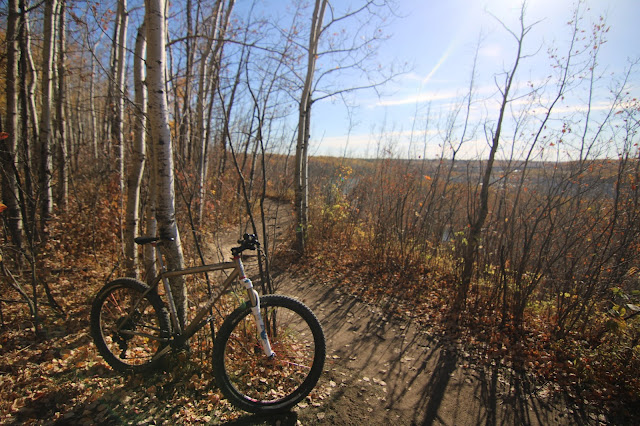 A rather impromptu ride through the Terwillegar side of things as suddenly Thanksgiving was happening at my place which put the planned into the night ride into jeopardy which angered me a little but I got over it once in the trees surrounded by all the amaze that is an Alberta fall.

I parked up near the Staff College. I think anyone who rides in the Terwillegar area in any sort of frequency will realize you have to be bat shit crazy to park at the main parking lot on a perfect weather Saturday afternoon. Once I rolled through the parking lot later and I saw the crowds and people parked along the road going up the hill I realized there are just way too many people out nowadays.

The trails are still in the ultra amazing conditions they were in last set off. Go Trail took me down and I found myself in the hills on the golden covered singletrack leading to the bridge.

Crowds? yes there were crowds and it was a bit ridiculous at times. Once across the Terwillegar bridge I took the singletrack but avoided all the main trails that all the Facebook users talk about and went on the outside loop known as Oliskew Meadows (so I think).

The idea of riding Selkirk Knights had me thinking if it would be a good idea while on the Fort Edmonton bridge but some signs of night shift fatigue set in and I got scared. It would have been nice to get away from the people. Instead I turned back right into the belly of the beast, the Oliskew singletrack starting with Flat Pete. I didn't come across too many people until I got onto Flatter Pete and kids... It was a little ridiculous.

There were about three groups of people all moving at an alarmingly slow rate and I came up behind each one of them and politely followed for a little bit until they realized I was there and moved aside. No I am not in any way bragging about riding fast, I was literally catching up to them as my bike coasted.

The last group was a family with two smaller kids (about 10-12) on the log trail. What's that called again?

Yes it was the log trail so two small kids was probably a bad idea and it was. Both were crying and riding and walking their bikes. I eventually got to pass as the father whom was a bit clueless didn't know how to tell his kids to move aside and stop for quite a while. He eventually did near the end and as I rode away the crying slowly died away.

Its was clearly obvious the father had no idea about the trails and where to ride.

The ride home was great despite the crowds, I took the outside loop for a change before climbing up into the hills and finding Go trail for my return home to turkey and family.