Coming at you on a Monday and we are so very sorry. Actually, no we are just running out of time. This one was actually started Thursday night when I got too tired and put it to sleep for a bit.
This one comes after a morning of trying to get Mrs Lonebiker to Barrhead for surgery, yes surgery in Barrhead when we live in the Edmonton region. Yes, the land of lots and lots of hospitals and clinics. For whatever reason that was where the appointment was, the drive is about an hour and a half northwest from here and did not happen as there was quite the weather event that landed on us first thing in the morning. Gusty winds and heavy blowing snow greeted us as we departed. Naturally we discussed the consequences of trying to reschedule and turning back with all the covid bullshit going on.   Obviously the surgery was not a life or death situation. The turn on to the highway made it clear if we were smart we wouldn't go. It was a nightmare.
Hence, a boring day was had at home. A bike ride was thought of but fatigue from the early morning had me sneering at the idea of suffering on a ride. Mind you, I was tired as shit yesterday and it was great.
SYC is from the Edmonton area and I cannot find one thing on their website about this beer. I even did a search and came up with nothing. What is going on?
Their website isn't too bad, info about their beer is good (despite nothing on this one) and they have an online store with a pretty deadly 'Beermonton' shirt.
Hell ya.
I can only assume this one is discontinued and now half the beer team is wanting to leave. What a bunch of hosers.  We poured and a dirty golden beer which looked like it was made from pineapple and such, probably because it is a tropical fruit sour beer. It smelled of tropical fruits and reminded me of smelling Five Alive. Remember that? Or do they still make it? So yes a definite heavy dose of fruit.
The first sip gave us that. It was more than I expected and took a bit to get used to. This one does have a lot of flavour like passion fruit, grapefruit and guava. It does come at you heavy but it relieves itself with a nice mouthfeel. A definite acquired taste for SYC's Cold Recovery. From what I got from the website is this one is done. Yet I still found it.
For the fruit lovers.
This one gets 2.5 suds out of 5. 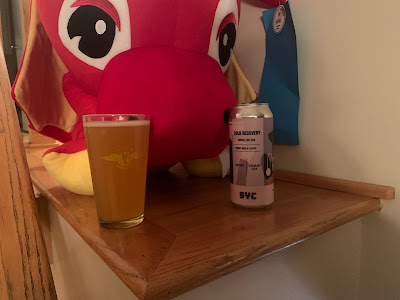