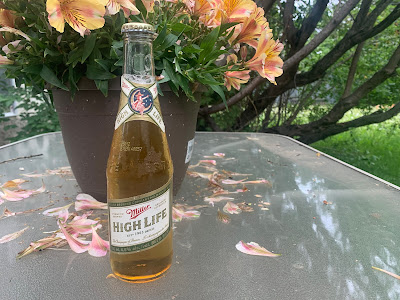 Back to one of the bigger North American breweries for this week after a long stretch of micro breweries with the odd old as dirt European beer making an appearance. This company is not stepping back when it comes to being old and distinguished. It was 1855 when Frederick Miller opened up Miller after moving to America from Germany which makes this one legendary.

Miller High Life is the proclaimed champagne of beers and with a higher than normal level of carbonation and somewhat clear colour we can see how it got this nickname. High Life had some great commercials back in the day. I am not too sure if they are still doing commercials but it was always about the blue collared person looking like the hero. Now as a guy that just finished an 85 hour work week on nights building mining truck boxes I say Hell ya Miller High Life! Hell ya!

The pour showed a light beer that was an off golden and off clear colour if that makes sense. It was a grainy aroma that oddly smelled watered down. Was this a sign of things to come? Oh lord I hope not cause my blue collared veins are boiling with excitement after watching some commercials. A small one half fingered head lingered for a while. We poured for the review but I think this one is best drunk out of the bottle.

It dies have a skunk like taste to it but is backed up with hidden flavours that add a small level of sweetness to the sips.  Do I want to say sweet corn? It does have a corn like flow to the mix as well. There is that watered down tone to it so my nose was right! It is a nice easy drinking beer that that washes over the palate and down your throat helping you relax after a rough day in the cubicle. 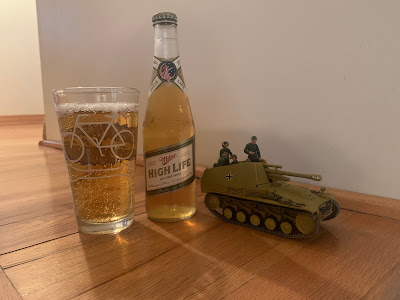