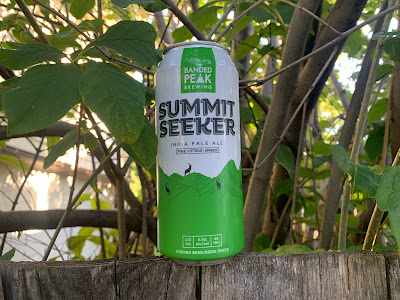 Another Friday has come and we got this one from the local shop after forcing myself to go pick some up despite being dead ass tired Yes it is night shift recovery week, although it wasn't a full 85 hour work set as things at home were quite stressful and needed my attention.

Banded Peak is located in Calgary, Alberta which is home to the Godless Flames and Stampeders. The brewery has a taproom which has grilled cheese sandwiches and other snacks that you can go to and sample their beer.

Well it looks like the impatient beer pourers are getting restless so let's get at this shall we?

A very thick head that would not die stood atop our dark and golden IPA that was about one and a half fingered thick. It's amazing because we poured this about eight minutes ago and the head has not changed in it's size and now I am starting to get a little worried.

It had a citrus like tinge to it as I took a gentle sniff as not to upset the head. Malts and citrus are all I got out of the smell test. We were ready to sip this one but that head would not relent so I went in there with brute force and sipped creating a wave of disbelief amongst the interns and review staff. Phrases like "he's so brave" and "wow, that was the manliest shit I have ever seen" other sounds of gasps and disbelief soared through the room. Sounds of a woman crying could be heard muffled by her hands.

This one tasted like it smelled, a sight grapefruit taste masked by malts. It is a delicious IPA with no bitterness.A beer that seems to finish dry which had so much sexy lacing that I thought I was going to lose it. A very fine and easy drinking IPA.

Truth be told. I haven't had a bitter IPA in so long I forget what they are like. 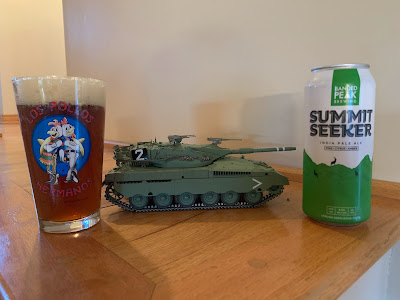