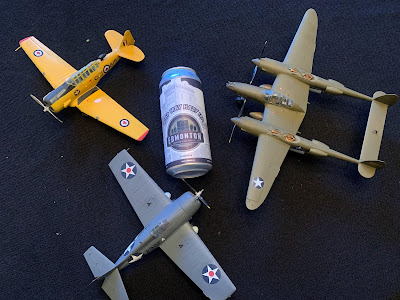 Holy shit do we ever do alot of IPA's on here. I just realized that right now as I was typing 'IPA' onto another beer Friday headline. I wondered how many so I checked the beer review archives and then realized I do them every so often which isn't too bad.

So there. How much of your lives did I just wait making you read that?

Wop May was a Canadian fighter pilot hero from World War 1 who fought the famed Red Baron in a dogfight.  After the war he lived here in Edmonton and is now an Albertan flying legend thanks in part to his services in hunting wanted fugitives to training pilots and helping establish Edmonton as a major centre in ferrying planes from America to Russia for the second world war.

Edmonton Brewing & Malting Co is making their debut on here and they gave Wop May some mad respect by naming their India Pale Ale after him. Something that the brewery does is honour a part of Edmonton's history on their cans which is very cool.

it poured a dirty golden colour like a proper IPA should. A smell of a slight citrus acid hit the nose as well as a light tracing of hops. You could tell this one won't have that classic IPA bitterness to it that so many of the new ones don't have anymore. Upon first taste it is confirmed that there is no bitter bite to this one either. Instead you get a nice easy drinking beer that has a slight citrus taste to it, the hops are there but do a good job of hiding themselves. In the end it was a fine beer to have on a Friday evening in front of the computer downstairs in the basement getting high on modelling fumes. 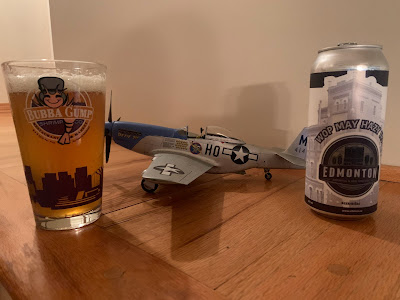