Woke up this morning and looked outside , saw the snow falling and just about went back to bed . I can`t really be angry because it is November 21st and I`ve been riding mainly dry trails up until today . The only thing that angered me was I just got the Ibis fixed up thinking I could get a couple rides in on the carbon wonder . 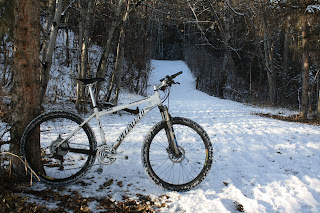 not to shabby of a winter bike I must admit

So I blew the dust off the Stumpjumper and for the second week in a row I went to Strathcona science park . I was surprised that the world didn`t implode with me doing something different two weeks in a row. The first few kms were quite miserable for me as I did NOT like riding in the snow , it grew on me and I started to enjoy the ride . I even went on some of the good singletrack trails (which is something I don`t do in the winter) Everything was going swell and I was at one with the snow when I spun out on a normally fun technical climb . So I had a good spaz and destroyed eight to ten trees with one of the best tantrums seen this side of the Alberta hospital . 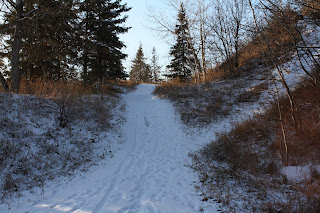 
After the spaz I entered the famed Ewok and had some good singletrack moments until again I spun out . .......................I kept my cool this time and walked up the hill with my tail between my legs . The ride home was good except for my feet freezing which ended up getting pretty bad by the time I crossed Ainsworth Dyer bridge . I hate when I`m riding and some sort of pain you have is all you can focus on .............Guess I should have worn my winter booties today . 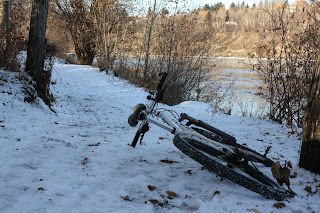 white bike, white snow and ducks swimming
in a very dirty part of the river .(there are ducks
there , believe me)
at November 21, 2009