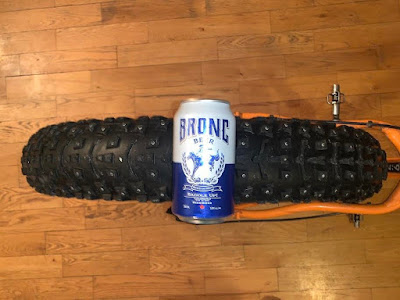 It was a productive day as the orange Winter wonder bike was put back together with new pedals and a brake bleed where it was successfully done on the first attempt with absolutely no tools thrown in anger. Hell I may have only dropped two f-bombs the whole time which should be a new record for fewest curse words uttered while I work on my bike.
My history with bike repairs have been quite a tumultuous affair over the years. I remember a wheel flying across the basement one time and crashing into the basement fridge we have. A rather large dent on the front of the fridge and an angry wife was the final result as I could not get my new tubeless tires to seat in the rim one year.
Could today be the beginning of the end of the inept home bike mechanic bullshit?
I hardly think me installing a new 11 speed derailleur and setting it up so it runs smooth with zero issues will probably ever happen in my bike lifetime. I have always wanted to learn how to properly tune up a bike and you would think after riding since 1992 I would know a thing or two about mechanics.
Welp... Nope I don't. This is why I have good bro's like Kent.
This beer comes from Calgary, Alberta. I cannot find much else about them, their website is one of the worst I have seen since I started doing these reviews. They have a bit more content on Facebook or Instagram but it just seemed like they repost people out enjoying Bronc beer. I noticed they give high praise to Wrangler wearing folk, especially when the individual is near a horse or doing something manly cause you know... Berta.
The pour went well for this common American styled lager. A crisp golden beer entered our tester glass and had a two and a quartered fingered head which is now down to a skimmed head across the top while I type this. A sign that this beer can retain it's frothiness and look cool while I stare at it. Lot's of heads disappear quickly cause they are scared. Have I mentioned this beer is from Alberta and is not afraid of nothing, well except maybe another carbon tax.
It has the smell of a very faint skunk like aroma. Common for these types I believe. We sipped and this Albertan lager delivered as promised that a cheap 12 pack should. It's decent, all the lager taste is there but in the style of cool 80's beer commercials this one has a bit of a vile aftertaste. It almost reminds me of old brussel sprouts in a way.
After a few more sips the final conclusion? You know what this is for? You want taste and quality? Go eat a dick you craft beer princesses, this shit is here after a long week at the junkyard. Fuck ya boys. Not something that will mess you up quickly at 5%. It's cheap, so drink lots.
Responsibly of course..
This beer gets 2 suds out of 5. 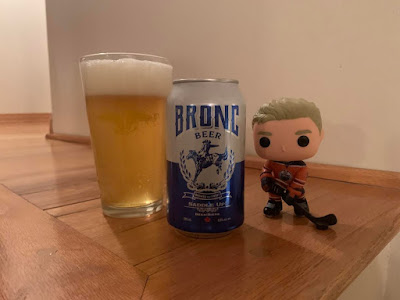