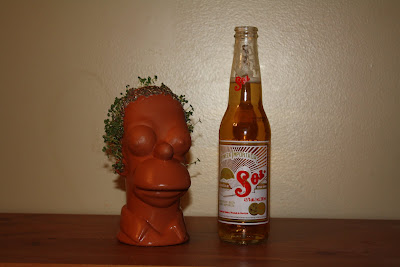 This weeks beer comes from Mexico and stands under it`s big brother who we all know and love (well , most do) "Corona" . Brewed in Monterrey Mexico from a brewery I am not even going to try and spell out (sometimes my Superior Spanish skills are lacking). The brew was founded in 1890 and they claim to be the "original" Mexican beer .

I did make a mistake tonight and realized we needed lime . Sadly , like Corona you need to add another ingredient to make it taste what the brewer intended ......And that`s just gay kids . Maybe I am a boob , but don`t you think the beer should just taste what it was intended for out of the bottle ? As far as taste goes it was very light and should have been served with a lime (have I said that yet ?)

Maybe better on a beach far far away , now get lost ! (this shit made me grumpy)