On yet another Saturday I bring you Beer Friday. What do I blame this on? Work? No. Riding? Yes, and that is a pretty damn good excuse!

From the "look at what I'm drinking" files comes Guinness. A beer that you most likely would look pretty kickass sipping from at a house party, or in a pub, or at the company staff barbecue hoping that that "girl in sales" will take notice. All the while she is more interested in that wanker drinking strawberry coolers cause he's different. Don`t worry! If I'm there, I'll notice you! What more could you want?

Guinness proudly makes it's home in Ireland. Home of the worlds biggest rock band U2, the cliffs of Moher, and countless pubs stowed away in the coolest little towns, yes, even cooler than Beaumont (I think I just heard my wife snicker.) Arthur Guinness started brewing in 1759 in Dublin. Long, long before the first Angry birds first flew across your little Ipod screens and took revenge on those bastard swines.

The genius behind Guinness would have to be the widget. Or as I like to think "the magical widget." What makes it magical is you can take it with you on bike rides if your into that sort of thing. I took one yesterday but only for photo purposes. The thought of drinking alone in the river valley just doesn't sit well with me. The widget, they say is what helps form the head when you open the can and pour it into a glass making it replicate having it poured from a tap. There is alot involved and it took Guinness several years to come up with the right widget to work. The rumour is the widget helps preserve your beer during all the bumping and jarring one would find having it stuffed in a camelback, thus you could ride to the top of a plateau, stop, open one up and not have it spray everywhere like you just won a Nascar race. Like I said I never opened it up yesterday so I can't say for myself if that myth holds any truth.

The pour delivered what it was supposed to. Absolute pure awesomeness! It`s worth buying this just for pouring it into a glass and watching the show. The colour is black with a brilliant white foamy head that makes the beer God`s get up and dance. Many people say that Guinness is an acquired taste but the two I am having tonight are serving o.k and I don`t know what's so special about it. What is surprising is how smooth it is. You would think by looking at it that it would punch you in the nuts. Instead it dances around your mouth and goes down your throat smooth like it was meant to, like water. There is the problem. Beer should not taste like water. My taste buds wanted so much more considering the show it put up during the pour... 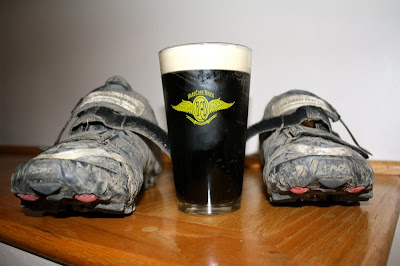