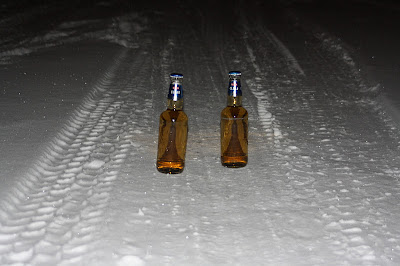 After enjoying another late snow free November the snow showed itself and Winter came to us in a fury. The temperature right now is -18° and it took me forever tonight to warm up. A night out with the girls and I screamed like a baby and ran to the car  every time we went outside. I'm not ready for this Winter thing! I realized it's time to suck it up, and being the genuine Canadian that I am I decided to drink cold beer and talk about it on this here Internet thing.

Sleeman brewery began in 1834 in Ontario by a guy named John Sleeman. Sadly prohibition closed their doors in 1933 for bootlegging into Detroit.... Wait a minute. That's so badass! I just grew a giant mound of respect for Sleeman beer and their badass bootlegging! I can see a bunch of well dressed guys driving Buick 8's armed with tommy guns crossing the border with their stash of alcohol for the dry Americans. I know the real story is far from that but the term "bootlegging" conjures up images that  most likely don't even come close to resembling what really happened.


Sleeman Clear is described on their website as canada's first low carb beer (oh thank Heavens for that)  with 90 calories which would equal a quick trip through Mill Creek ravine or maybe a little more. At 4% it claims to be easy drinking and after a few sips I see why. A far cry from the giant bottle of 8% French Canadian bottle that stood and stared at me on the shelf which said "whatcha looking at bitch?"prompting me to quickly turn around and grab my Sleemans and head for the register. I didn't pour it as the bottle just looked too damn good! The first sip seemed sour and carbonated and after a few more the sourness never really went away. Upset I threw the bottle at my dog and tried another... The same. It wasn't just soured with carbonation, it also tasted like water. Sleemans Clear had me at hello, but quickly lost me on taste. 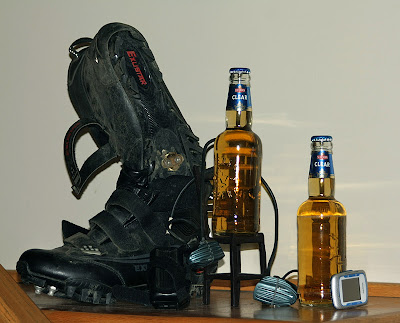