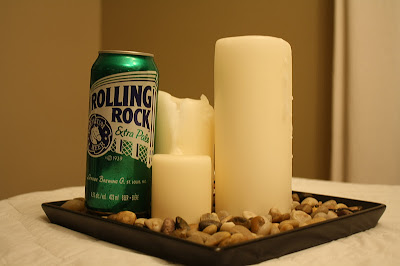 A return to the beer reviews after a much needed vacation. The lonebiker pro beer police took some much needed time off as the pressure to review beer weighed them down heavily. What a bunch of giant pussies! All they have to do is drink beer and talk about it!

Rolling Rock comes from St Louis Missouri. Home of the Godless Rams and the current baseball champs. They are in St Louis as the giant Anhueser-Bush company now runs them. They started in western Pennsylvania and grew to be a national product which inevitably made Budweiser jealous so they bought them out (oh yes, I'm positive that's how it went down). One of the curious things about Rolling Rock is each bottle and can has the number "33" on it. Nobody know why there is a 33 but the myths are out there, one going so far as saying that number is the highest the Freemasons can get. That kind of shit creeps me out a little. But I get creeped out by clowns so I guess it doesn't take much.

The beer poured nice and golden and showed a giant head that was larger than my hand. Amazing? Is it not? I am quite out of practice with this beer review thing so my beer pouring talents have gone to shit! The taste was quite ordinary, much like you would get out of any Budweiser or Coors. There was nothing that stood out as I swirled it around my mouth, although some shot out my nose when I saw one of my dogs try to hump the angry birds plush toy laying on the ground. That kind of shit cracks me up! Would I recommend this beer? No. It bored me, unlike watching my dog fornicate with small plush toys. That my friends is good quality entertainment! 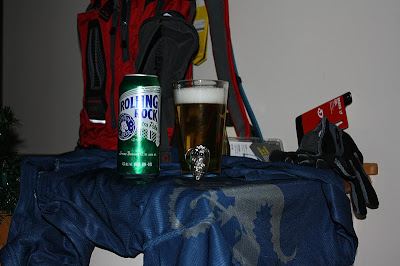