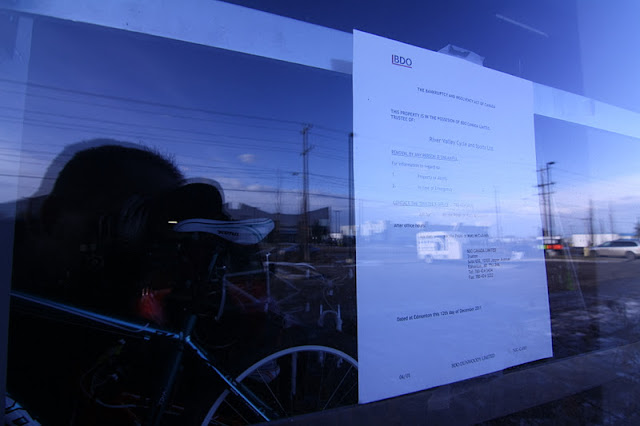 After hearing the news about River Valley Cycle going bankrupt when I got home after a long day last night,  I was put off. My mind wandered a thousand miles an hour thinking about all the times I've spent in there. Strange behaviour yes, but I'm sure there are hundreds of people all around right now doing the same thing. I have accepted what happened now but truth be told denial was there. A coincidental meeting in the parking lot earlier today brought four mtbr members (well, one not coincidental) standing outside looking through the windows wondering what happened.

In 2007 I had the same feelings; only magnified when I heard their shop was on fire. My thoughts then said they are gone and all those bikes are gone with them. I made a few trips to the fire site and sadly looked at all the melted bike frames and strewn apart bike parts and felt a little creeped out. My "biking world" just had a nasty kick to the groin.. Fire is horrible. Nuff said. This shop has had it's ups and downs with me over the years.

So if I may? A few words for a shop that should still be around...

I'm sorry we didn't get along like we should have, I had Coast bicycle to help me get going. In those days I flirted with you probably because you had all those nice high end bikes in your Whyte Ave location. Oh how fitting of a location was "River Valley Cycle" which pretty much bordered the river valley (well Mill Creek, but close enough). The place was a hotbed of activity and after a few years of riding I finally caved and betrayed Coast and bought my dream ride Rocky Mountain Altitude T.O.

The time flew by and we became distant again. You moved, I flirted and eventually bought another bike elsewhere.

Then the unthinkable happened and walls became rubble. I remember being in Mill Creek for a ride and riding through a smoky haze. That moment in my riding life was very surreal as I was thinking about all the frames and memories that now were floating through our river valley. You were reborn and I was on the bandwagon and walked in with a sock full of money to get back in touch with my boys from British Columbia, but oddly enough found Ibis instead. Yes I betrayed you again.

Our relationship has never been that strong yet I feel like I just got dumped by my girlfriend. That girl I had a strange on again off again relationship with. We had our troubles but when she was gone, I was a mess. Now she's gone for good. Man I'm going to miss her!