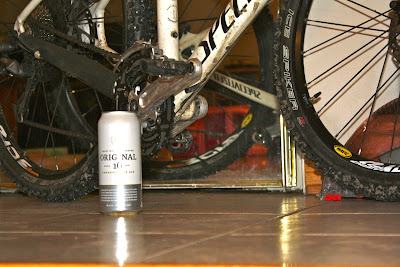 Oh dear! Have I gone right from "Music Monday" to "Beer Friday" with no content in between again? Nothing, absolutely nothing... Not even a cheesy Youtube video for "blog filler!" I took my bike to work two days this week and failed at the driving to Mill Creek and starting to ride part. I didn't do unproductive things like watch my friend play "Combat ops" or whatever the hell it's called on the Playstation. I did do things with my kids so in the end I won. At least I think I did. That bike sure looked good tonight during the picture shoot though!

Original 16 hails from Saskatoon Saskatchewan. A city much like Edmonton that has people turning their noses up at but once you go there you are amazed on how awesome it is! Wait a minute! I've never been there so I don't really know what it's like! I've heard lot's of good things though.... How about their river valley? Is it fabulous like a certain river valley in this fair land? Yes you say? Well maybe I'll head there this Summer and have a browse...

This beer originated in 1989 when former employees of a certain "unnamed" brewery started their own after the big guys decided to close up shop. Named after what I thought was a hockey slogan "Original Sixteen" I soon realized what a poor Canadian I was and it had nothing to do with hockey. The name came from the sixteen members who started it. Quite cool actually! They remain independent to this day which makes this here beer reviewer stand up and salute!

The pour was beautiful. Golden and gave a generous two fingered head that would make even the most self righteous non beer supporter blush. The smell made me stand back and sniff again... "Could this potentially be the best beer I reviewed thus far?" I thought to myself.  Fearful of letdown I took a sip and was not let down. Yet I wasn't convulsing with beer tasting orgasms like one should on a Friday night. It was good... Great? That's a hard fence to climb over soldiers! My mouth cried for more! Yes, it's smooth and a tad on the creamy side and does what it's supposed to on a Friday night. But... do I want more? Yes! 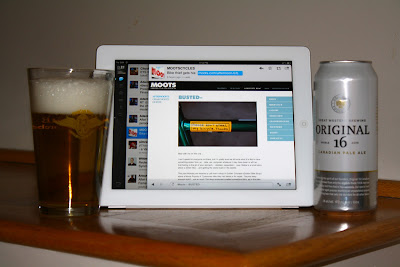