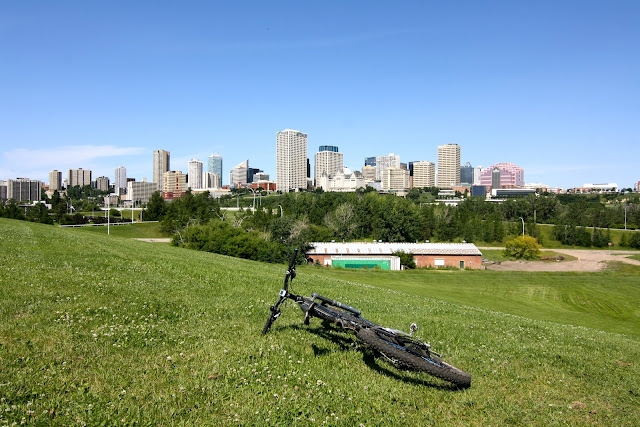 From Mill Creek to Gretzky bridge via the north side trails. A hot day where I was buzzed by two F 18's as they did a fly by for the Edmonton Indy. That happening while on a bike is pretty great, in my little world a bike ride with fighter jets flying over low and loud is the equivalent to having 79 virgins as those kind terrorist folks like to think they get for blowing up innocent people. Yes I love me some fighter jets!

The ride was ok once the jets were gone. Mud puddles were everywhere and I had to stay off the good singletrack. A bee sting while rolling through some high grass alongside the trail was a definite bummer. Right above the knee too, which made for painful pedalling for the rest of the ride.

The Indy car race took place today as I rode and I couldn't hear them as well as other years. Of course after talking to some tourists I ran into telling them about how you could hear the Indy cars through the whole valley... Today, they were pretty quiet.