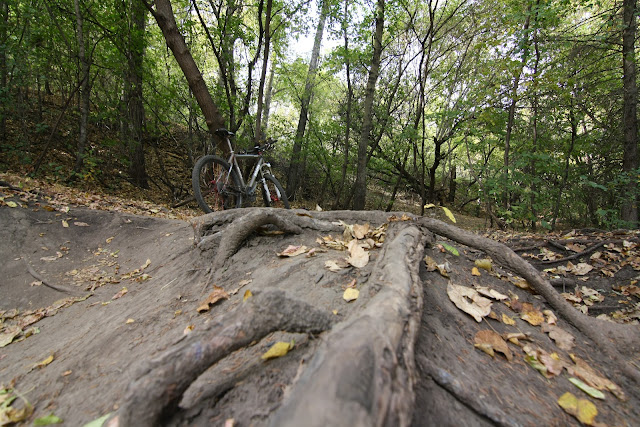 A return to the trails after a return to Edmonton after witnessing one of the most bizarre football games in NFL history. You may have heard about the catch that wasn't. Ninety nine percent of people would have called it an interception. I was there, I saw what happened, he caught it. Seahawk touchdown!... Absolutely no Seahawk bias here by the way. No sir. On a serious note, the reffing was horrid the WHOLE  game. There were just as many bad calls on the Seahawks as there were the Packers. Plus eight sacks for the Seahawks in the first half! They deserved to win that game...

Now that I probably lost the few remaining readers on here there was a bike ride to talk about. Well if you could call  it that. I seem to have regressed to the point of one of those guys who takes his bike out to the river valley once a year. I struggled on pretty much every aspect of trying to navigate a bike through the incredibly awesome Fall valley. I even struggled getting the bike out of the Jeep. Yep, it was that bad.

The valley as I said was incredible. My return down there gave me goosebumps once the smell of the fallen leaves overtook me, what would have made it better was somebody leaving a fresh apple pie on a windowsill along the trail but you can't ask for everything now can you? An empty Mill Creek pool and lots of missing person, and dog signs greeted me along with several hundred school kids on field trips.