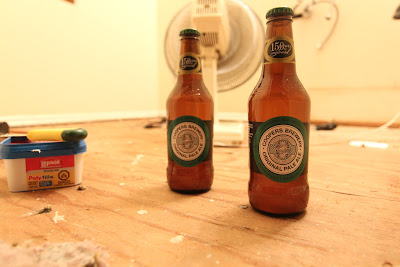 This was a fine looking six pack that was kindly delivered to my door by an incredibly fine young man.  It will serve me well after a day of unexpected renovations after some flooding ruined what would have been a pretty darn good weekend.

Coopers brewery in Adelaide, Australia stands proudly at one hundred and fifty plus years old. This is the largest brewery in Australia which surprised me as I always thought Fosters was the king but further research showed that it wasn't. Fosters isn't even brewed in Australia (well, according to the interwebs) and is owned by Heineken. coopers Brewery is the King of Australian beer and we are sampling their most famous brew. The company is also known for their home brewing equipment which may seem a tad odd to some as that would push away from their beer sales. Seeing the success of this company I don't really think it would matter much.

The Original Pale Ale is pretty cool as there is a custom to drinking it. You should roll the beer from side to side to agitate a sediment. This is from the beer not being pasteurized or filtered during the brewing process. The beer is carbonated by a secondary fermentation as yeast cells cloud the beer and form a sediment (and if you think I read that I'm truly insulted!) The pour showed a grainy yellow beer that left no lacing on the glass, a small head took charge just enough time for a picture or two and then whoosh... it vanished. This is easily a beer I could sit down with a few chums and enjoy knowing full well everybody would be happy. It was not bitter and was flavored with hops and malts with a hint of fizz. This one was a warm welcome back after a long lapse in reviews. 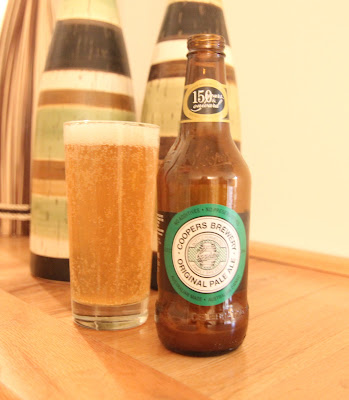