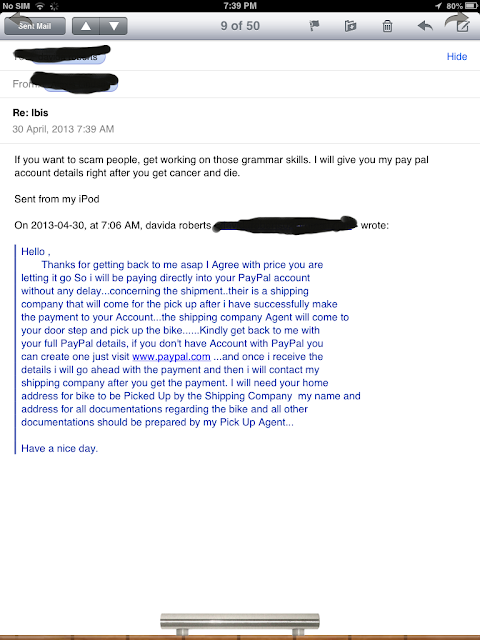 I have spent too much time on Kijiji lately with making the wrong choices and buying the wrong vehicles. Inherently had to get rid of one of the "said" vehicles on Kijiji. Instantly two scammers tried having me send them Paypal account details and I kindly never responded. I then got the right vehicle: A Jeep and decided I should sell the old one and received more scammers. Got angry and said nothing.

With the recent decision to sell off the Mojo I posted on Kijiji as well as Pinkbike,  received responses and had no-shows when one kindly looking soul emailed and asked about the bike. With the poor writing I only assumed it was a 15 year old who texted too much. I responded and got the response in blue in the above. Instantly I was enraged and typed off my response spit on the floor and moved on. A tad harsh you ask? Yes. My Dad went through cancer and didn't make it so I know about the horror. To wish that on someone? When it comes to bikes, don't fuck with me. Bikes are sacred.

Even though this guy wasn't a bike thief. I felt the threat and was even more offended than I was with a thirty thousand dollar truck. Bike thieves are a different kind of evil. Thankfully I never have been a victim but have kept the bikes well secured in my journeys.  If that ever happened I would probably quit my job and hunt the fucker down and beat him black and blue... And then beat him further. High end bike thieves can burn.
at May 01, 2013