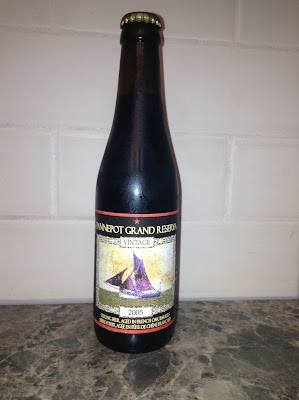 In the past I have held no reservations on my feelings towards strong beer. Often admitting they scare the shit out of me and I hide like a little bitch behind my wife as she opens them for me. Ladies and Gentleman. I believe this is the King of them all. At 10% and aged since two thousand and five. The year of the birth of YouTube, this beer has been sitting on my desk for over ten minutes giving me menacing looks and shoving smells of candy up into my flared nostrils... Wait a minute! Candy you say? Well yes, it has a sweet odor with a very small hint of hard liquor added to the mix. make no mistake this beer is badass. The usual shelf picture didn't turn out having my dog as this weeks prop looking too scared sitting next to it, thus I had to retake in front of the computer. A lonebiker first. Strange beginnings for this one.

Deca brewery in Belgium was founded in 2001 and the very beer we are reviewing has won numerous awards and is very highly rated on many geek beer sites. In fact it was second place to the Trappist brewers who made the famed Westvleteren beer on the craft beer rating site Ratebeer.

The pour was somewhat of an adventure as I said earlier a dog was introduced to the mix. It obviously did not go so well. Hardly any head formed and zero lacing is left on the glass during the great consumption process, my guess is cause it was scared. The first sip was met with much trepidation with warnings of a very strong beer. It was in fact strong. Not strong with alcohol like one would expect but fruit and dark berries. This beer finishes very smooth and you don't get the inner shakes when trying to swallow it. Once a sip is downed you want to sit and savor the taste that's left in your mouth as visions of unicorns and midgets riding flying cats with laser beams shooting from their anus go through your head. Yes, this beer is that good. 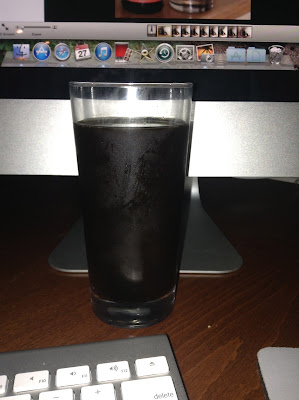