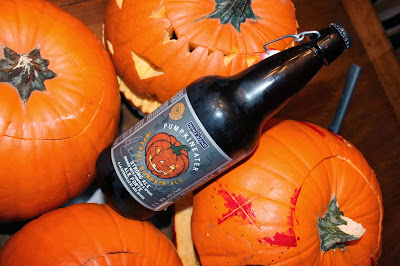 On this the last day of the great Fall beer run we are hitting this one out of the ballpark with an 8% one litre bottle of man beer. A beer so grandeur it comes with it's own closable lid. Ladies and gentiles this is something Ghengis Kahn would have picked out of the beer cooler and smashed in the skulls of lesser men as they walked towards the cashier with their Bud Light Lime.

In Nineteen Eighty, Howe Sound brewery was born when a couple of fine chaps started their craft brewery. John Mitchell who in the beautiful British Columbian province is known as a pioneer of craft brewing in Canada and is the man behind Howe Sound brewery which officially formed in Nineteen Ninety Six. The brewery which has been on here before is in the Howe Sound area of B.C. Yes, I may have said this countless times but could British Columbia be the epitome of all that is awesome about Canada? Hmmm, being Albertan that's a hard thing to say. Yet every province has epic awesomeness bestowed in themselves. Except for *Saskatchewan, yep, *Saskatchewan stinks.

The pour gave a dark orange, pumpkin looking beer that was capped off with a massive three fingered head that would not want to die. I had my handset ready to dial 911 but was relieved to see this head slightly reside. The odour of this one was all too familiar to all the other pumpkin inspired beers tested this last month (oh joy!), this smell made tears well up inside my eyes and I remembered all the happy moments in my childhood. The beer went down well and umm... There still is more than half a bottle left but I have vowed to finish. Pumpkin is evident in the taste as well as dark fruits with a carbonated taste, a tad sweet maybe? Hmmm, maybe not. This is one of those strong beers that does not taste strong yet makes your belly feel all warm and fuzzy. 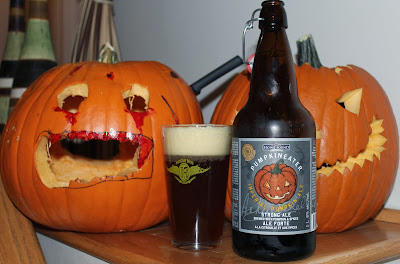 * I'm not going to apologize to Saskatchewan, what have they done for us lately? Besides given us wheat and a bunch of drunk football fans that come throw up in our non Saskatchewan streets. Ya, thanks for that Saskatchewan!
at November 01, 2013