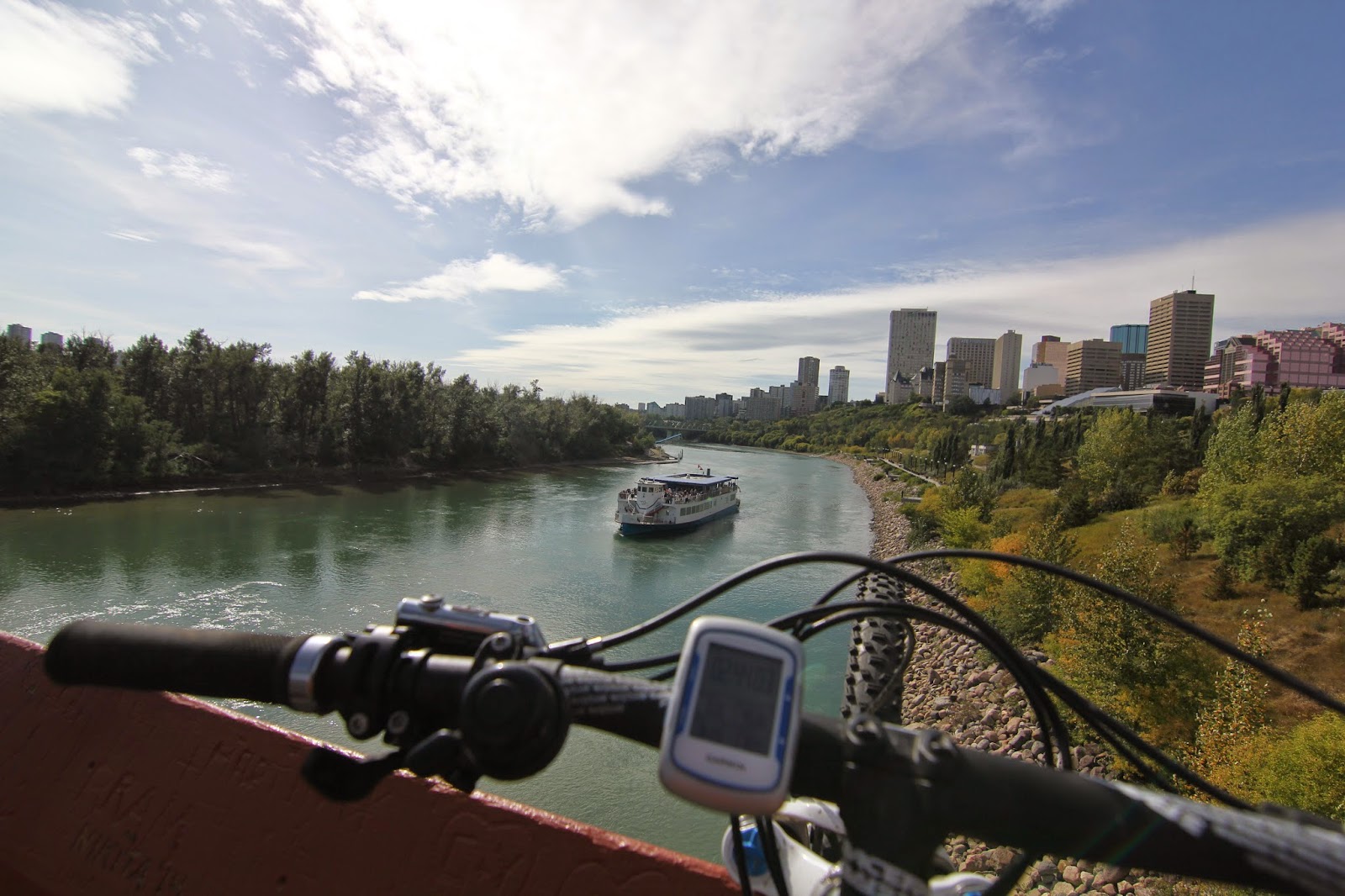 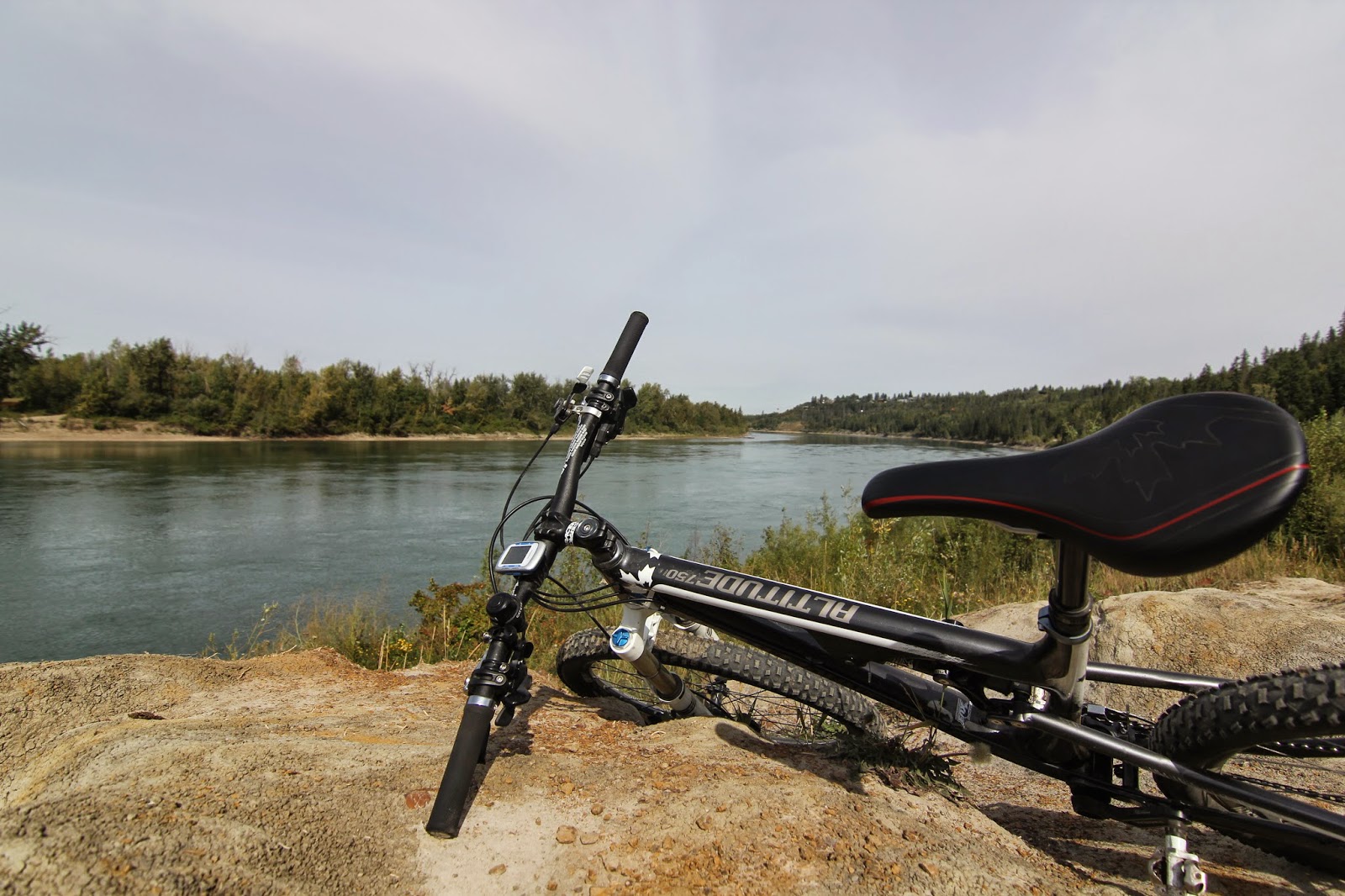 When I close my eyes now I see handlebars and riding happening, a sign of a great day. Today was a bit unexpected. I had the day off in lieu of the NFL starting last night, a tradition in my household which was all that much better as it was my boys dropping the Super Bowl Championship banner and then proceeding to beat the hell out of the Packers.

I planned on a long ride and parked at Cameron Heights thinking I would ride through Terwillegar and maybe hit Mackinnon play in that area and come back through Hawerlak to ride all over Terwillegar. Once I crossed the river underneath Anthony Henday drive I knew immediately it was a bridge run. The thought of going all the way to the other end of the river valley and crossing every bridge I come across and riding back had me a bit giddy. The Terwillegar singletrack was carefully ridden as I am now a bit scared of that place. Three off the bike for a long time experiences were had in that park, two broken ankles and then pneumonia. I think Terwillegar is fighting back for all the abuse I have given it. Seeing Firemans trail completely shut down was a bit dis concerning but made sense for the new bridge being put in. They really went out of their way to keep us out of there although I found an entrance but was a good boy.

For such a long ride it was quite uneventful, no weirdos, no crashes (well almost, keep reading) just endless miles of great singletrack linked up by paved trails and roads. A lot of greats were ridden today, Mackinnon, Kinseman area, Old Timers, Rolling Below Rowland, Victorias Secret... sigh, things are getting serious, and Groat Road Rollercoaster. The bike performed admirably and the one riding it had no issues on such a long one.

I did have all intent to make it to Beverly Bridge after riding through Cambodia but that little voice in the back of my head kept telling me "the further you go, the longer the ride back." I should have told that voice to fuck off and kept riding. In the end I am pretty sure I would have made the journey which would have been over 100 km's which would have been pretty sweet.

The turn around point was Capilano bridge, seeing the map above I wasn't that far off. Once heading back on the other side I entered Rolling Below Roland and a rush of fatigue hit me. My shoulders  crashed into several trees and I had to stop and take five and mentally get over it. It worked and I rode on crossed Dawson and at that time felt invigorated. A rest stop on the doomed Cloverdale watching a couple white trash guys drink beer and overly react to every lady walking or jogging by was very awkward. Don't they know you are supposed to wear dark sunglasses and stare and say nothing like I do? Geesh... Come on guys.

The return was great, long-ass rides are funny because I always break them up into segments. I think lots of people do to help overcome the distance that is needed to be covered while wore out already. Thinking while riding the High Level of where I had to go was quite foggy. When I hit Victorias Secret I planned on the Museum flower garden as the next stopping point, from there the Talus dome was the next stop although I rode on by and stopped on the incredible Fort Edmonton Bridge. A sign that my fitness is improving immensely.

If and when I do this ride again I will most likely avoid Oleskiw. An awesome trail leads through there but I cannot find an exit without being forced going into the snotty Edmonton Country Club. I guess once the new bridge is built linking up Terwillegar it won't be an issue. I rode up and out of the valley through the dumb golf course and into ugly residential bullshit to stay committed to the cross every bridge ride. The map above will show you how much ground was covered dodging mini vans and steer testicle equipped diesel pick up trucks. It was a lousy way to end an incredible day on the bike.

In the end, four Cliff Bars, two peanut butter and jam sandwiches, and a fill up on my three liter hydration pack was had. The water probably would have lasted but I kept using it to cool down in a sick manner that you should not know about. Tomorrow most likely looks like a rest day so maybe Beer Friday will pay you a visit, although I doubt that will happen.