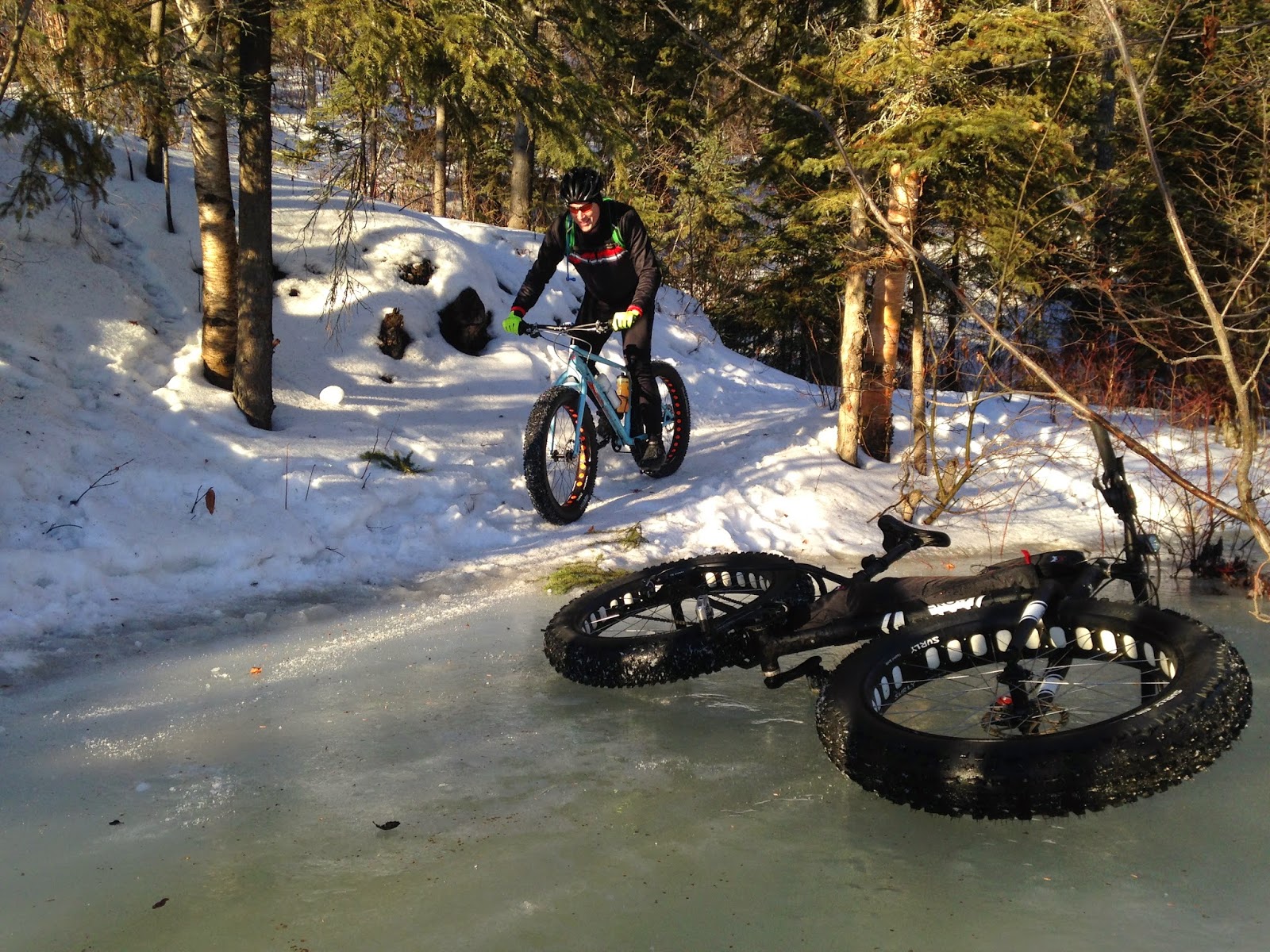 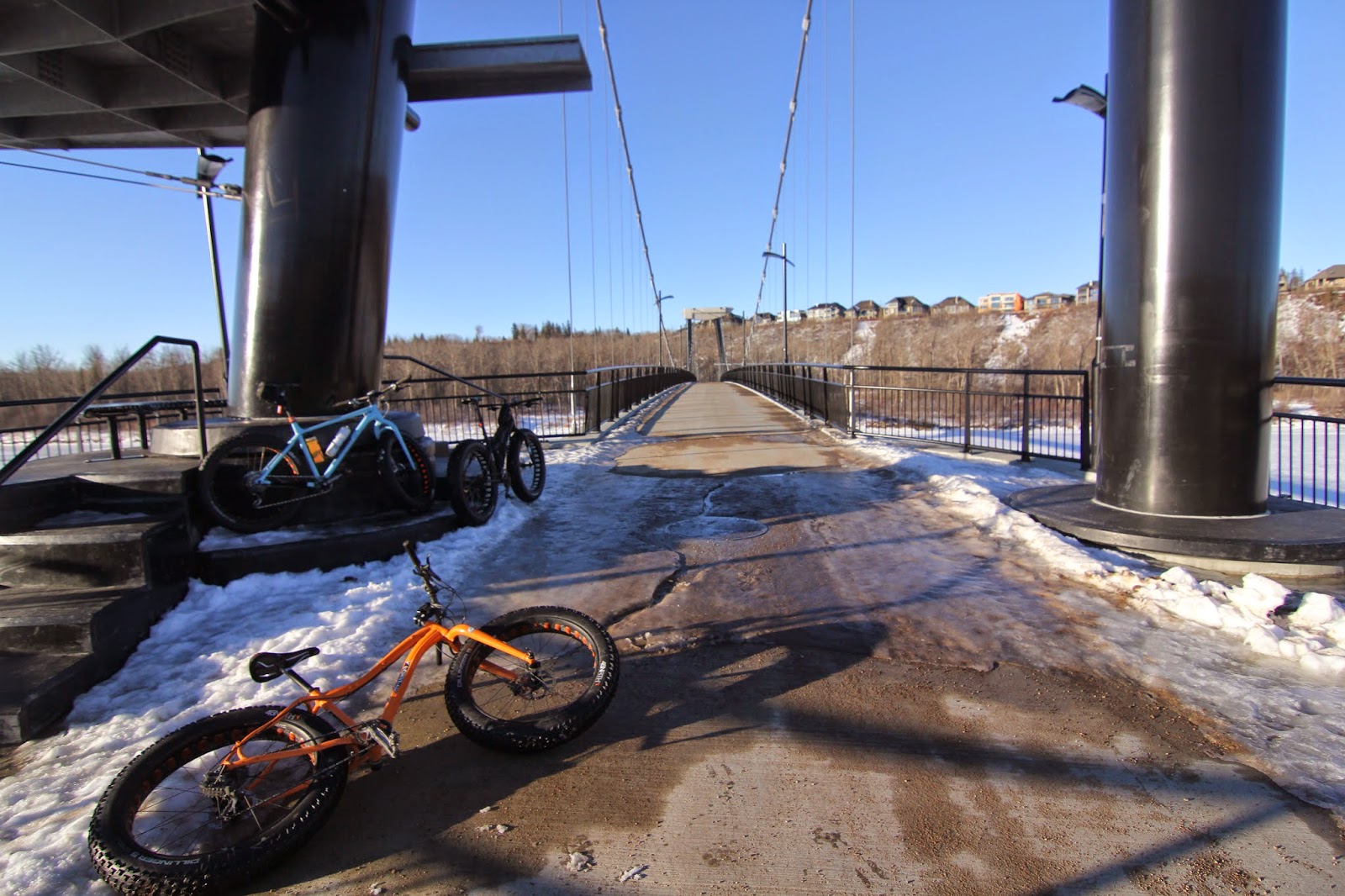 Massive rides are simply the greatest. Nothing else can compare to the awesome feeling afterwards, well you know, besides the birth of my children and marriage and all...

The ride started with five of us. Newcomer to Lonebiker, Kyle joined up on his Trek Farley but I sadly got no pics, or videos. I did get a pic from Gord in the early dark stages of this one but you sadly get no green Trek Farley. Out of the five of us, three had studded tires and they proved to be the factor today although Gord held on for quite a bit. After the ice got Kyle in the evil sneering way it does he finally said 'to hell with this' and promply and wisely booked it for home. Four falls on the hard ice is much more than I could take.

Myself, Kent, Gord, and Jason made it to Hawerlak park after many kilometers of not complaining about the trail conditions and the ridiculous warm weather. In fact we openly mocked people who would complain about such a travesty as ridiculous warm weather in January. It poured rain the night before, but that's cool with us. It's only January 24th. That's normal for it to pour rain in the middle of the night in Edmonton, Alberta.


Laurier Climb Out from sherijumper on Vimeo.

Ok, I have to admit, that last paragraph was a bit of a lie. We may have complained a bit about the weather to passers by, as well as to every living creature that resides in the river valley.

It was absloute shit terrible down there today. The Multi use and singletrack trails were nonstop sinking in. I could still hear that terrible sound of my rear wheel giving up and dropping into the snow accompanied by that shitty feeling of the rear dropping into the snow. When on the paved it was glare ice which provided many ass puckering moments. Fuck me. I hate this weather.

The ride dropped to three as Gord saw an ice ladened downhill in Hawerlak and made a wise decision to book it as well. He did have other commitments but I feel he made the best decision as riding unstudded on what we were coming up to would have been a nightmare.

With a group of three, me Kent and Jason pressed on to shiny ball sculptues, strange tales of 8 year old girls alone in Patricia ravine, douchebags driving BMW's, and nasty ass ice ladened climbs where I spun out, crashed, and slid down in a sad realization that I don't make the best poor weather condition decisions.

The original plan today was to hit Terwillegar park. Given the conditions we decided to press on backwards to the ski hut at Goldbar park from the Fort Edmonton Footbridge. I was snickering inside thinking it wouldn't happen.

The ride continued slogging through countless miles of shitty trail where a very overtalkative but friendly woman would not let us go in Laurier. Eventually we booked it and climbed up towards Mackinnon.

Legs were seriously starting to burn as we got near the Mill Creek entrance at the doomed Cloverdale footbridge and Kent bid a proper farewell. Down to two, me and Jason would not say it but we knew were going to make it to the ski hut.

We made it to the hut. Mission accomplished, now to ride home.

The warmth enveloped the river valley like a dark plague invading a Bible story. The trails were completely done. We took the multi use from Capilano (with a slight singletrack attraction) to Ewok where I had enough and we both admitted riding ice would be better than riding the sinking snow.

An end to the hopeful 60km ride was celebrated with a couple of beers which sadly should have been five beers partaken.

We were close to 60. Given the conditions. I think 56 was well warranted.

In the end. Fat bikes proved their worth. Or did they?