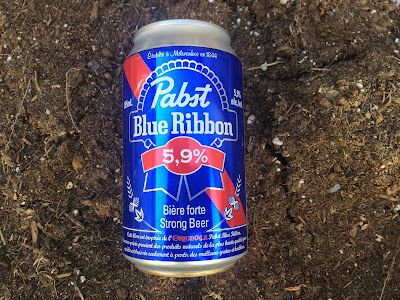 Strong beer and the big beer makers that make said 'strong beer' always find a good way to fuck it up and have it taste like fermented hamster piss laced with burnt rubber shavings in the end. How they do this has always been baffling to me. I have had Molson's and Anheuser Busch's take on the strong beers and they are the ones directly responsible for my fear of anything over 5%. The taste is absolute horrid.

Thankfully craft beers have come and improved the image of what a true strong beer should be. I have done countless strong beer reviews on here and hid behind the counter as the pour happened fearing pure fire and brimstone but nothing happened and the beer was quite prodigious.

I can only assume my house will be attacked with used records by armed skinny jean fools riding fixies if this beer review does not go down as planned. That is why I have armed myself with the complete anti hipster kit consisting of a shower, dockers, and a right hand to smack them and knock their fake glasses right off their heads when once that happens. They will run, and run far.

That's right hipsters, I know you love your Pabst but I have a legit beer review to do.

Let's see how this one fares now shall we...

The pour gave the beer review team a showing of a regular looking beer. I was instantly afraid and hid behind the counter as the pour concluded. "Could this be like all the rest of the big brew strong beers?" I shuddered and nervously spoke out loudly as the beer pour was finishing. A very regular looking beer, golden crowned with a one fingered head tried showing itself prominently to a bunch of unimpressed beer reviewers. Will this one have that overpowering taste of hamster piss that we all know and hate about strong beers made by big breweries? Is Pabst in that category? The first sip told us right away that it wasn't.

It was strong but it was hard to tell. This would be the perfect beer for those searching for a hard cheap beer to have on the weekends. You know the trips that involve waking up in the morning unclothed and not knowing where you are? Yes. Past Strong would be awesome for that. It doesn't taste like shit either which is a huge win. It's like regular Pabst only with a kick. This beer is what it is. It's strong beer meant for.... Well, you know what. It didn't taste to differently to my regular Pabst I had as a comparison. Meaning, Win, win for Pabst. 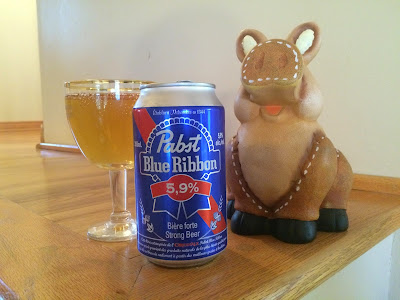