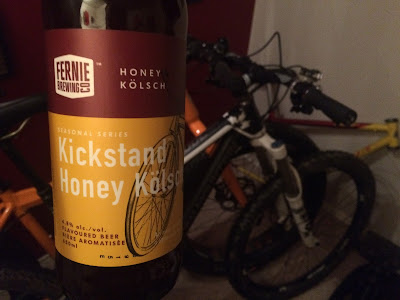 Well, what can I say? Things have been dreadfully quiet on this here blog. So quiet in fact that we had to lay off 80% of the beer review team workforce. Yes, a pretty big hit to the workforce that empowers the award winning beer review team.

What's worse is the lack of riding. This is now week three where no cranks have been spun on any fine bicycles. I only had one day off this weekend and this is it, back at it tomorrow. So who knows how long it will be until I finally get the balls to ride on work days. The biggest opponent has been being able to find time to ride. Something I cannot seem to figure out.

Fernie, British Columbia. Quite frankly heaven on earth. Is home to Fernie brewing. A group of people literally living the dream living in a small awesome B.C town with endless riding and skiing. That combined with fishing and numerous other outdoor activities makes me seriously contemplate things.

Kickstand Honey Kolsch is the Summer brew from their mix of seasonal brews. Thankfully the executives held on to our lead beer pourer "Lars" and this was  his moment to shine. With tears streaming down his cheeks for his fallen employees he poured that beer like it was his bitch. Well, I guess Lars treats his bitches like shit because he poured this one like shit. He let a giant head envelope on top which was much larger than what Fernie brewing would permit.

Lars was fired on the spot.

The first sip gave us an illustrious shot of honey mixed with golden hops but at the same time traces of being watered down filled the air which sent shockwaves throughout the room. Fruity goodness is had and you are soon awash in honey albeit a bit watered down. This one is definitely good, not record breaking great, but good. 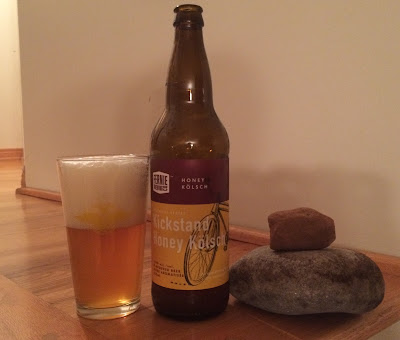