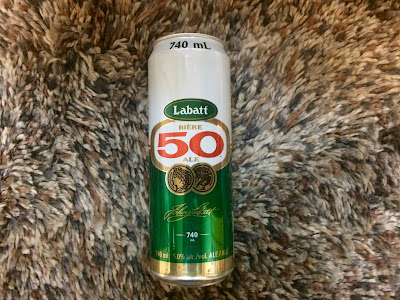 Another silent week now rolling in to a quiet weekend on Lonebiker which I could only assume will roll into another quiet week. A trip to Denver happening next weekend will kill any chance of a weekend ride. That all being said makes this here beer review the most action on the blog for the next two weeks. Another new job (yes, that now makes 4 for in the last year for those keeping track) has kept things a bit off kilter until I try to settle in yet again. The good news is after work rides can probably start happening. When? That's a damn good question.

Could Labatt brewing be recognized as a great part of Canadian history? I would answer with a resounding Yes. It started in 1847 in London, Ontario by a man by the name of John Kinder Labatt. The company started in London and now London remains it's headquarters to this day. Labatt's which is best know for Labatt's Blue. A once proud beer that stood on the shoulders of many overlooking all the other big name beers. Oh how the mighty have fallen. What happened to Labatt Blue? A Canadian tear for the once great champion.

Labatt 50 came about in 1950 and apparently was quite popular at one time. Seeing it today made me think it was new as I had never come across this one. Fermented using a special ale yeast. This was the first light beer to come on the market in Canada. At 5%, it makes me wonder if everything written on the internet is true.

The pour gave a nice golden beer that definitely didn't inspire me to go write a children's novel.  It was plain and ordinary, a one and a half fingered head showed itself quickly before a pic could be had. The first sip was what was expected from a beer brewed in the nineteen-fifties. I felt like Don Draper in his back yard drinking a beer after mowing the lawn on a nice sunny fifties day. This one did end well. Grassy hops which made me think of Saskatchewan with a slight hint of unearthed dried fruit. Would I pick this up for a barbecue? A good chance that would happen my friends. 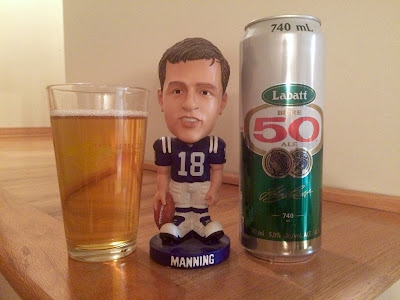