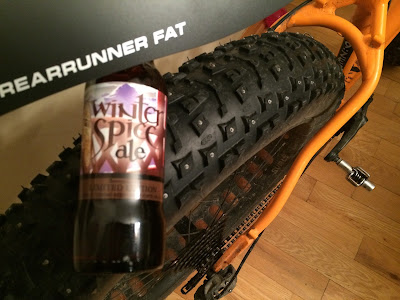 Beer Friday two days in a row and now on a Saturday!? You don't say! What a treat!

Yes kids. This is actually happening. Now try to control yourselves. It was an eventful bike filled day that included zero bike rides. So yes. I'm still a giant loser that should be driving an Escalade to Costco with his dipshit twat of a wife searching for deals on toilet paper and rib eye steak.

Thankfully, my wife is the farthest thing from a dipshit Escalade driving twat and I spent the day at the Edmonton bike show with Lonebiker stars Gord, and Kent. Well... By "spent the day" we were there for an  hour tops. It was quite barren with cool shit. I'll give it a pass as it was the first year but geez...

I got more out of Hardcore bikes where we went after to pick up the Summer dream bikes after they got a much needed Winter overhaul.

A surprise awaited as it turns out they were paid for. To the person who did this (you know who you are) I say thanks. Quite the golden surprise to walk in to. To the staff at Hardcore Bikes. I am truly sorry for the over the top awkward moment.

The other happy free-be for the day was my accountant giving me a free beer (oh, you know who you are too) which is the subject of the review for tonight.

A full staff was on tonight for this one. Big Rock brewing located in Calgary would probably be Alberta's flagship brewery. As a born and bred Edmontonian I say 'Screw you Calgary, Alley Kat is the best!' Oilers! Eskimos! Booh Ya! Championships! What you got lady boy Calgary?

Anyway's. Big Rock was formed in the year of our Lord Nineteen Eighty Five by an Albertan hero named Ed McNally. He was given the order of Canada. Nuff said, the man is a Canadian legend. The brewery is named after a giant rock sitting outside Okotoks, Alberta.

The Winter Spiced ale tested today comes on one of the worst Winters we have ever had. The word "Winter" surely doesn't apply to this year. Hence this is a limited seasonal edition brew we will keep our spirits up although it is pretty much Spring in February and Winter is dead.

At 6% content this is usually one that would scare me but after years of beer testing. I am all man. I did shreek after reading the bottle and hid under the kitchen island for ten minutes but in the end... after much coaxing from the interns, I came out ready for this review.

The pour gave us virtually no head, even after much coaxing from the pourer. Kind of a bad way to start this one off. The first sip came and the room was silent. Nutmeg and cinnamon were there, albeit a tad watered down. More sips and it didn't feel so watered. How strange? Ginger is also there to welcome the Winter senses making you feel all warm and cozy. If only it was cold and blowing outside! How much better would this be? The taste definitely described 'Winter.' Sadly no lacing was left on the glass making me wishfully dream of beer fairies dressed in lingerie slowly teasing me and undressing leaving that lacing left on the glass.

In the end. If you see this, try it. Much better than last night's... 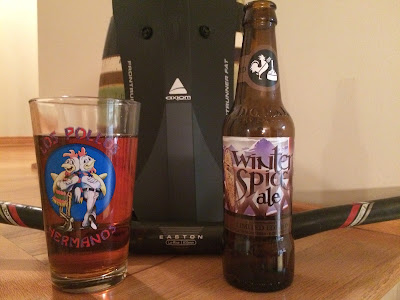