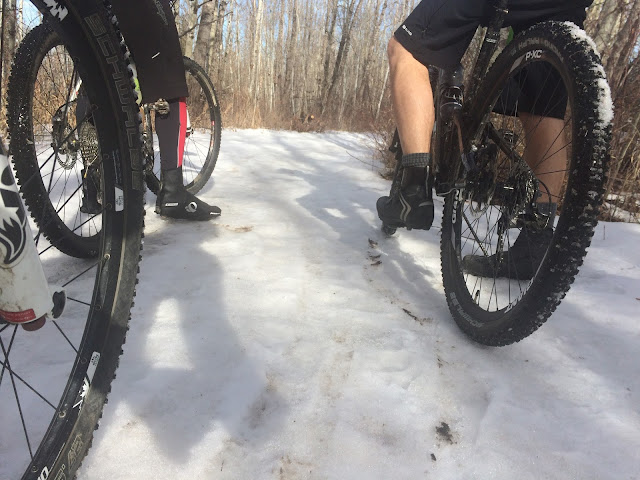 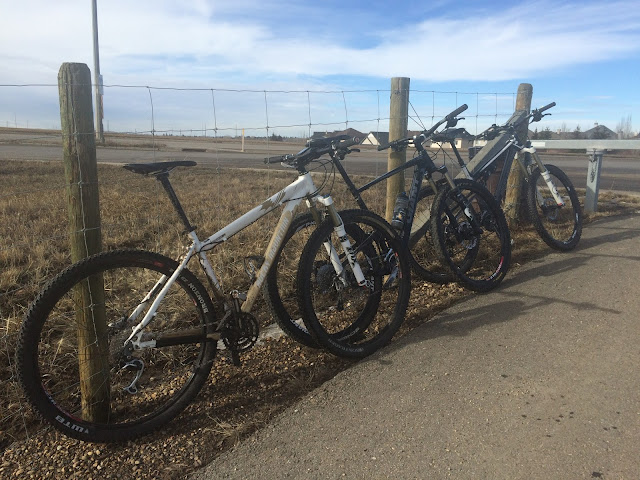 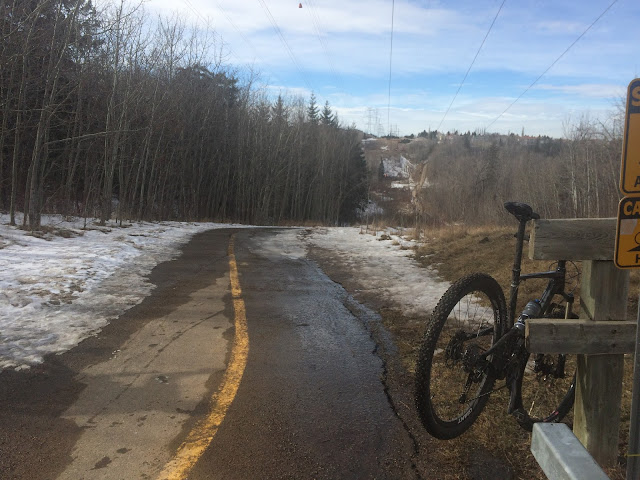 A return to the Summer wonder bike with a meet up with Gord, and then later Kent. This ride had it all from one can expect in March:

* Wet paved trails with the occasional iced bottom layer covered in an inch of water.
* Large amounts of people all getting in the way on a warm Saturday.
* Me. Being a grumpy bitch, all thanks to the conditions we we're in.
* Multi use trails where your bottom sinks occasionally into the snow (Hence grumpy).
* Guys thinking they are cyclists whilst riding E-bikes.
* Grime and grit running through your expensive drivetrain.

Gord was the winner in the smart man department as he brought his old RMB Vertex to the show which has a million plus miles on it and the don't give a fuck factor was high.

Myself, through lack of shitty bikes to ride I chose the Altitude. I knew it was going to be a non fat bike day and the Rocky got the call, you know... Because we were riding paved trails all day. I really needed that six inches of suspension. I was going to come equipped with a GoPro strapped to a full face helmet with knee and elbow pads to complete the look but chose not to.

Good Lord! I need to get the Stumpjumper running again...

Kent's excuse.. New Bike! How could you not ride that motherfucker on a nice March Spring day! His 'Giant' Giant, Anthem has been on this here blog many times under a different rider. To see it pass on from one Lonebiker star to another and keep the bike in the blog fills me with unscrupulous amounts of joy.

The ride from the old Heritage Mall area to Cameron Heights was what was expected. Shitty. Paved trails for miles armed with puddles full of grit to attack your drivetrain.

Yet, in the end it was a good day. We rode. Enough said. The smell of the ravines in the Spring was a bit orgasmic. An unexpected trip into Whitemud ravine where things got a tad terrible after riding through blocks and blocks of look a like houses just to get there. Once in the ravine I had a very minor ice induced crash and my mood turned sour quickly. We ended up having a group hug at the end and all was forgiven.

Whats that you ask? Top five ride of the year for two-sixteen? I just spit my gluten free, non dairy frozen yogurt all over the computer screen in utter disgust. It was great hanging with two cool dudes today, but they know and I know there is plenty of great riding coming up.