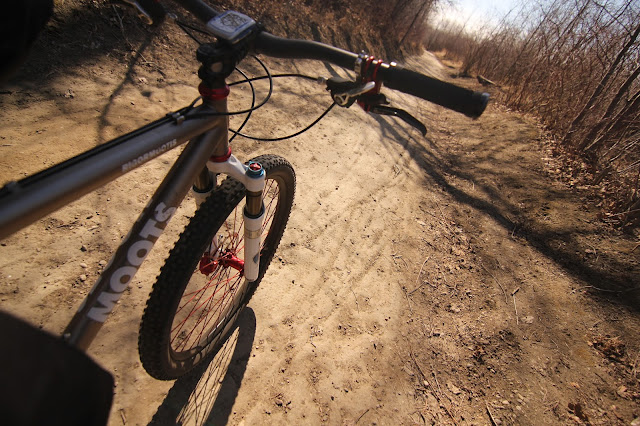 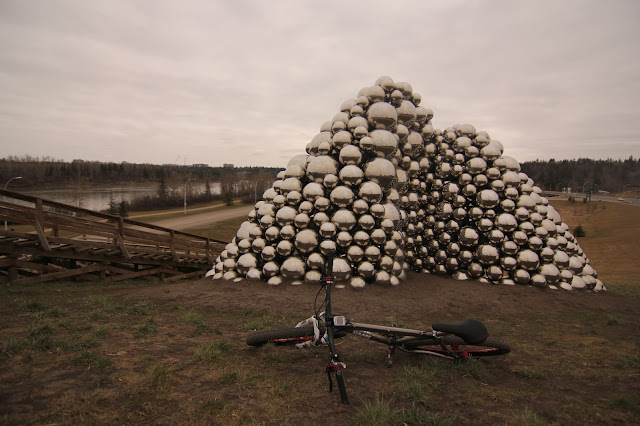 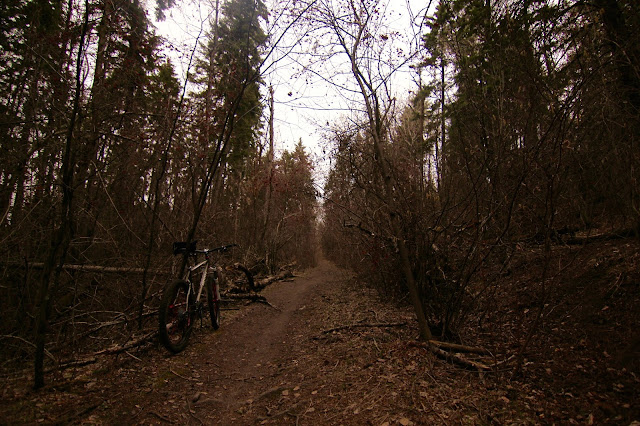 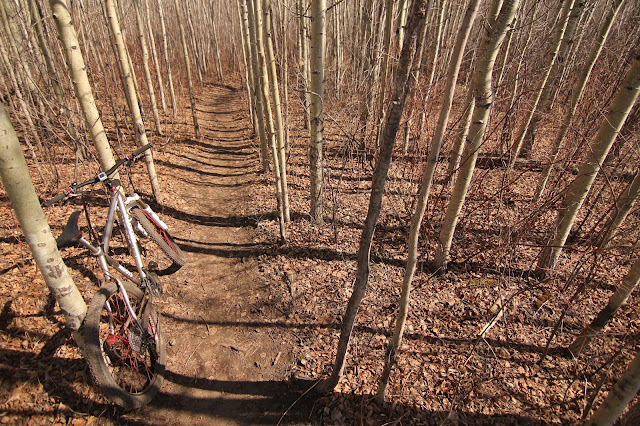 A return to the Moots on a cold somewhat dreary Sunday morning. With the cold I was treated to a very quiet river valley and it was the greatest.

A post I should have done while no posts were happening was all the upgrades done to the Moots during the off season that were much needed.  A new drivetrain, stem, and handlebar. As well as a fork overhaul and complete bike rebuild.

The drivetrain was done as the one on there was complete toast. I got a shorter stem with a bit more of a rise to make the transition from bike to bike not so weird. The bar was replaced as the previous one was carbon and it was old. The exact same bar was put on in place of the old only now is a bit wider than the last (80mm).

So in the end I was naturally more than excited to ride this bike today. As you can see in the pic to the left I had one little issue.

The ride started at Cameron Heights and I could feel a noticeable difference in the Moots. I was more upright and not over the front wheel so much and in the singletrack the bike was easier to control.

The Moots was it's same old self and just lurched ahead with each pedal stroke. I thought I had a big bike boner yesterday well let me tell you... Well I'm not going to give you the details but let's just say the bike was hard to control.

I was a bit of a putz and completely missed the new Terwillegar singletrack. The climb up in the beginning was giving me serious "fuck my life" moments and I turned off onto the multi use to try and regain some sort of composure.

I crossed each bridge as one should do on a bridge ride with the plan to turn around at the High Level. Machete was ridden or so I thought it was called *Machete. The front brake seemed a bit weak while descending, I crossed the river as per ride rules and rode Laurier out to Mackinnon. The trails were ridden for the first time this year (sans snow) and it was everything I thought about life that is awesome. Even the now pussified ending was fun.

I made Groat road bridge the return point and my rear wheel slipped on the slick trails of Six Shooter following a gang of riders climbing it up. It was dry but slick mud spots that didn't stick to your bike were prevalent.

With no front brake left as I noticed all the fluid had leaked out onto my fork I decided to hit Machete once again. Why ride it with no front brake you ask? Mouth wide open, drool emanating from the bowels of your mouth. Cause I'm Hard as Fuck. That's why. I'm pretty sure most of you just passed out on your keyboards at the awesome that just happened.

Machete was naturally quite sketchy. My back wheel did all the braking and it turned into somewhat of a controlled slide on the steep sections. It was scary, but quite fun. That's right... Hard as Fuck.

I crossed back into Laurier and rode the lame paved out to the Quesnell bridge with some multi use to keep my sanity for it's second crossing of the day.

The ride was changed as I ended up at the Fort Edmonton footbridge and did not want to Ride Oliskew and climb up into the shithead golf course country club up above. Only to ride streets all the way back to Cameron Heights as I have before on bridge runs.

A prayer to the bridge ride Gods was had and it was decided that a virgin male between the age of 30 to 45 must be slayed and thrown off the High Level at midnight on the last day of the month as a sacrifice to the Bridge Ride Gods if I was to change up the bridge ride and not play by the rules.

So if you know anyone? Please send the poor bastard my way. I have till the end of the month.

In the end. Pure epic awesome.