Guys, I know what you all are doing right now after looking at that top pic. You are now judging me on how dirty my bike is saying things like:

"Why, I'd never let my bike stay that dirty, he must not love his bike as much as I do."

"What an asshole,who posts pictures of his bike in that state?"

"So this lonebiker guy is one of those guys who treats his bikes like shit. I knew it!"

"So he gets a bike themed beer to review and posts that picture! What a prick-fuck!"

My excuses. Time. After riding I am usually doing something with my girls to help get back some of that rejection they feel as they think Dad loves bikes more than them, once that is done it's get ready for work and go to bed real early. I work long ass days. Once my weekend comes I am thinking about a potential ride, maybe I'll get out and the process repeats itself.

We done here? Now that I bored everyone, it is beer Friday. I had a one day work week and now have a two day weekend. Now that right there. Pretty great. Working a twelve hour day warrants a beer so why not try Portland's Deschutes Chainbreaker White India Pale Ale? It looks almost as inviting as thirty miles of singletrack which ends at Century Link Field (home of the Seahawks bitches) with 50 yard line tickets.

Deschutes originated in Two Thousand and Eight. Which makes it one year older than this here Lonebiker blog. Wait a minute... How old are we?

*pulls out calculator
*sticks out tongue to help facilitate thinking

Were Seven! Cool, one of my interns just started clapping trying to turn it into a 90's themed movie spontaneous clap. Although nobody else clapped.

They were all immediately fired.

The pour took place in now an almost empty beer review lab (just me and that one intern that clapped.) We were left with a dirty beer that poured a gold that was left out in the sun too long. A citrus and something I could not quite pick up filled the nostrils. The first taste was naturally citrus followed up with a very mild IPA kick. This is one very nice and easy drinking IPA and probably should not be included under the IPA moniker. If you are new to beer and are scared to try a good IPA get this one. Its the elementary school of India Pale Ales and it's very good. 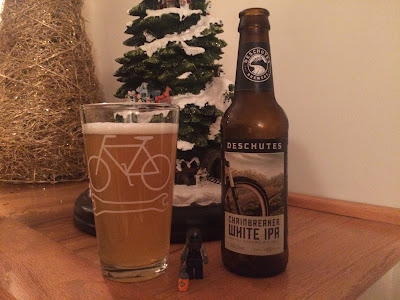