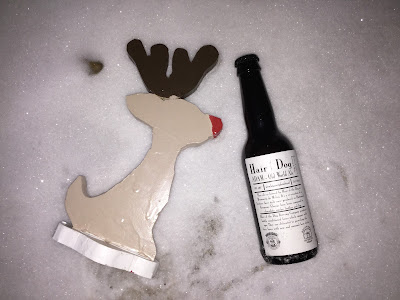 Happy New Year chumps. This is one that I have been saving for a very long time. Once I saw it I knew it should be saved for a most special of occasion! As events passed throughout the year I kept on passing it on to the next. Thinking "there is something bigger than this coming up." Ultimately Christmas hit (which I passed on. Am I nuts!?) and now the year is over.

I've never been much of a New Years fan but if this Dutch beer that has been teasing me all year long goes into Twenty-One-Seven still untapped I am pretty sure the beer review executives will have me thrown out and a new replacement will be sworn in. Who would it be? Ugh... I shudder at the very thought. I heard them discussing a possible trail runner as the next reviewer chairman.

The ugliness just saddens me at the very thought.

So on a special New Years Eve edition of Beer Friday we bring you Hair of the Dog. From Brouwerji De Molen in the Netherlands. A small European craft brewery that started in Two thousand and four. Located in a windmill which is a brewery, distillery, and restaurant. The sheer awesome of simply walking by that place would cause a beer enthusiasts head to explode due to the powers of the beer Gods in the air. This place is pretty special and I haven't even been there. I just know.

The pour was what we all thought it was going to be. Sensational. A dark chocolate coffee like fluid poured from the bottle. In no word of a lie three interns and an executive passed out on the spot. In the moment the head pourer read what was written on the label. 'This ale is brewed by Hair of the
Dog at Brouwerji De Molen. It's a recreation of a historic beer style once produced in Dortmund Germany. Flavours have been compared to chocolate, smoke, leather and figs.'

Once I was up for the first sip, I brought the glass up close to my mouth a smell of sweet malt that brought me back to my knees. Once the first sip hit I was awash in beer induced orgasms that created awkward moments for the neighbours I'm sure of it. Lots of toasted flavours hit you with this. I was almost detecting barley wine as each delicious sip hit my mouth. Chocolate, roasted nuts, malts that sat in a damp wood panelled storage for years... This beer has it all. Every tasting inducing orifice in the mouth is trying to discern what is happening as it is getting blown away. This is full bodied beer sex coming at you in every which way.

Beer of the year for Two-One-Six? Holy shit it just might be... Stay tuned for that one. Although I just might not have to bother. 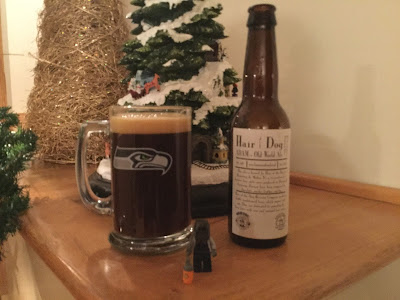