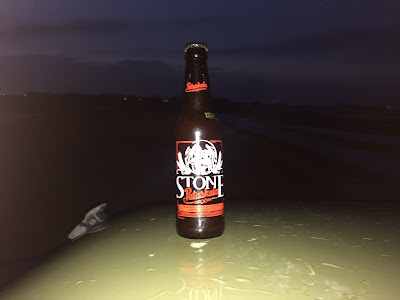 Welcome to the first of a few holstered beer reviews as my time is currently spent up in God's country. These were all done in the week before I left. The plan is to do them and unleash them whilst up north so the blog doesn't get too dry.

Stone Brewery is located in Escondido, California and was founded in the year of our lord Nineteen-Ninety- Six. Ironically the same year I met my wife. Escondido is also ironic in that it is hard to type out or just plain spell such as the beer under the gun today. Pataskala (I'm not too sure if that's spelt right.) Well... That's really not that odd or ironic. In fact I may have just put some of you to sleep and I'm sorry for that.

The Pataskala brew was one that was done to raise money for a charity and high demand brought in as one of Stone Breweries seasonal beers. A story that melts the heart of myself, the pourers and all the interns across the Lonebiker family.

The pour gave a dark red India Pale Ale that looked like it had attitude that would not take shit from nobody. A light two fingered head sat on top with menacing looks that scared away one of the new interns. I took charge when I saw the group breaking down and grabbed it, gave it a snort and downed some to the shock of the whole crew.

An IPA that isn't too bitter yet it reminds you that it's an IPA with every sip. A nice and easy enjoyable beer. Caramel that was in an almond tree that caught fire is oddly a taste that is there. The malts are not overwhelming and a last taste of citrus and pine hits you as you slowly down this one in front of a fire with your tablet reading your favourite blog. Gord's "Rides, Reviews, Races and Random Thoughts." 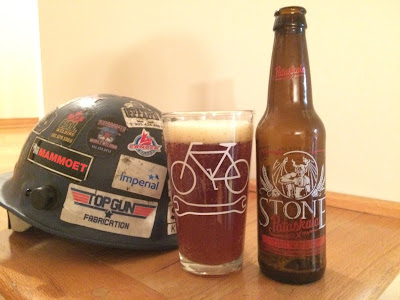