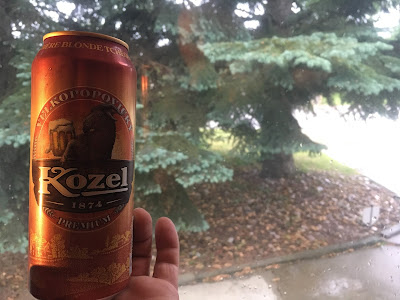 On a gloomy day that was supposed to be much more gloomier we bring you Kozel beer from the Czech Republic. I sit here with a bad case of saddle sores after riding the bikes three days in a row after nothing for two weeks. Sadly the body doesn't take kindly to the changes Today was probably the one that pushed me over the top as a wet and somewhat sloppy bike ride took place in Edmonton's  gloomy Science park (you can read all about that here!)

Kozel started operations in eighteen seventy four. They are so proud of that deep history they have it printed right on the can. They don't tell you that the early days of Kozel were not too pretty and the brewery was saved when a man whose name I will not even try to type on here bought the brewery and saved it. The man was the mayor of Smichov and what a fine mayor he was! Let's hope Don Iveson buys one of the local breweries if things (shudder) start going south.

The pour was done and we arrived at a dank golden coloured beer topped off with a two and a half fingered head that didn't seem to hang around much. The interns albeit a tad unimpressed because they have seen this before looked sullen and bored.

I fired them all immediately.

Nobody looks bored on Beer Review night. Nobody!

The beer tasted of light wheat that transitioned to white bread that sat on the shelf for an extra day. It was of beer descent but was sadly watered down which ruined the vibe. Was it watered down or just not full of flavour?  Either way, a rather boring beer where sadly I felt money was wasted buying in the craft beer aisle at the local store. 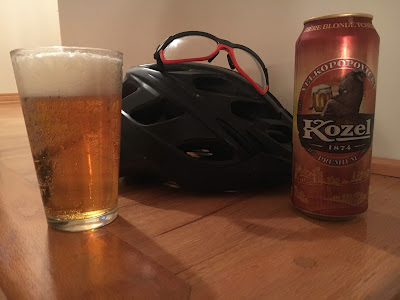