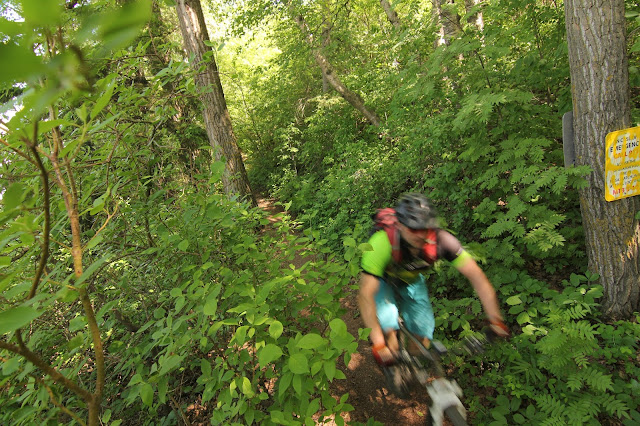 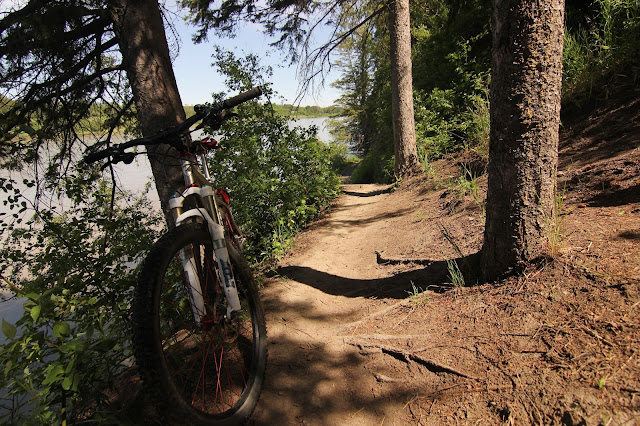 Fort Saskatchewan and a pretty flipping sweet titanium hardtail? Yes please. The return from work for the month of June had a pretty good start to the festivities. New brakes on the Moots will help it roll through the year, here is hoping I can stretch the life of the wheels a bit more longer.

The ride was very typical of Fort Saskatchewan. Easy trails in a cardiovascular sense yet challenging and downright scary for the newbs. The bike did what it needed to do and the rider suffered a bit. Some poor lines were chosen resulting in awkward root crossings where sometimes a foot dab happened. Normally I would be frustrated at my poor decisions but it's the first day back so I got a pass.

Nobody on the trails which makes mid week afternoon rides all that more better. Another reason to love the job I have. Mind you, the two weeks gone can be pretty brutal for the riding schedule. The one people encounter came in the beginning as I rode the very short paved to the entrance. An old lady yelled as I rolled past on the grass, startled by my presence. It was great.

I did nothing wrong, bell was wrung. I went on the grass to pass the couple. I think it was their first time outdoors away from the casino.

A rather spectacular over the handlebars crash happened on a quick approach to a root crossing. Immediately following the crash. Nature in its cute way decided to say 'fuck you' and an ant bit me on my arm. The ant was soon dead and I ended up pacing back and forth on the trail trying to numb the pain from landing on my wrist.

The ride ended in a euphoric state. Much akin to lots of rides in Fort Saskatchewan.