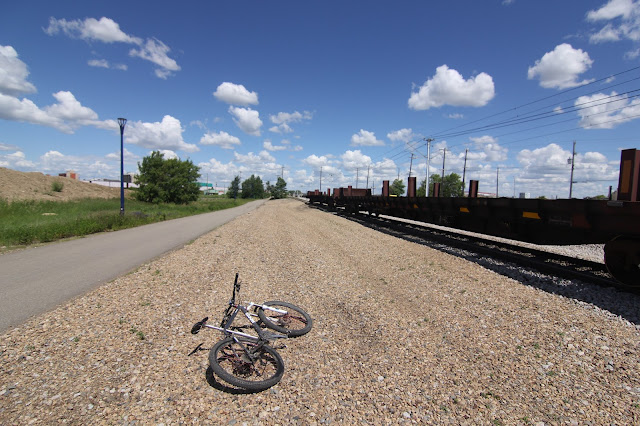 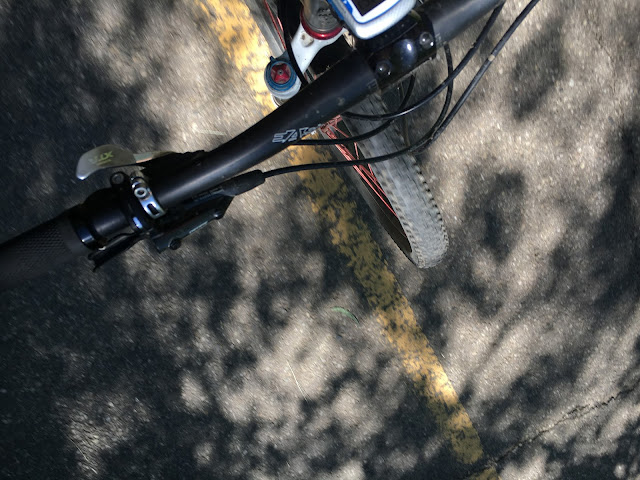 After two days of no rides all thanks to poor daytime planning a ride happened and not one wheel touched dirt.

I'll say again. Not one wheel touched the sanctimonious holy that is known as trail riding.

With periods of heavy rain coming down all over the city for the last two days I had figured the trails would be toast. I was out last night downtown on a photo hunt (sorry I dissed you trains) and a monsoon blew through ending the night.

On the LRT train back to the northside station I saw the paved path that I have ridden over and over on wet weather and sloppy snow rides was extended past Northlands and I got excited.

The paved trail if you are wondering starts around 97th street and features a long stretch of boring unchallenging pavement with not even one hill to challenge you. It's in a sketchy area and some of the fine folks you come across are a bit intimidating. This is an area of the city where heavy drug use takes place which comes with stabbings and murders. A lot of them unrecorded as they are homeless people with no sort of identity. Yes, it's a bit fucked up.

Sadly the thing that draws me there are trains. Yes not real trains. The Edmonton Light Rail Transit runs through. The trains and the great potential to turn it into a loop combining downtown and the river valley.

Today I rode past Northlands and it was just as flat and uneventful with less people. A new set of tracks came into the picture and I realized it was Canadian National and was quite excited. The excitement died when the trail abruptly ended and was forced to either turn around or take roads with out any safe bike passage. A sure sign that the city needs to do a lot more to build up the bike infrastructure.

I wormed my way through neighbourhoods and eventually hit Rundle park where I started to head back. The trails I passed by tempted me as they were dry in the trailheads. Seeing other riders come out of the singletrack looking rather clean I knew today's ride could have been better. I stayed off the trails and hit the city for the return home.

To end, it was a great ride but as I sit back typing this I know it could have been better.