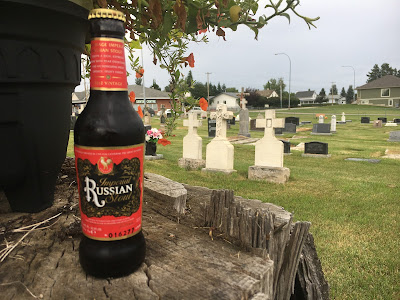 Welcome to Beer Friday. North America's largest growing beer review, bike blog, from the area of Beaumont, Alberta for the last seven years. With a full review team on hand it is time to kick things off and get going.

From deep in the trenches of the Beer Friday testing centre we bring one from England that was started some time before the introduction of smart phones and fidget spinners. The year was Seventeen-Eighty-Seven by a man by the name of John Courage. He died shortly after starting the brewery unfortunately. His wife took over and died after a few years because you know... the 1700's and all...

Nowadays the brewery is run by Well's & Young's Brewing and is a fraction of the company it once was as per sales. They brought back the Imperial Russian Stout to help save things and this is what we have in our grasp tonight.

At 10% alcohol this one has proof that it wants to be a true Russian Imperial Stout. A beer that came about in the 1800's to win over the Russian Czar with a high alcohol content and plenty of malt character.

The pour was quite uneventful and no head was there as I'm sure the head was scared to show itself around this dark evil looking beer. The smell was a powerful shot of dark hoppy malts. For a beer you could say the smell is almost overpowering. Intrigued, I took the first sip and the taste matched the smell. A bad way to start it but we kept going. As you down this one the test grows on you. Strong acidic coffee that was left on the burner for too long. Tobacco and smoked fir round out the rest. It's a flavour/smell explosion.

Not one for everybody, so only true connoisseurs take one of these. 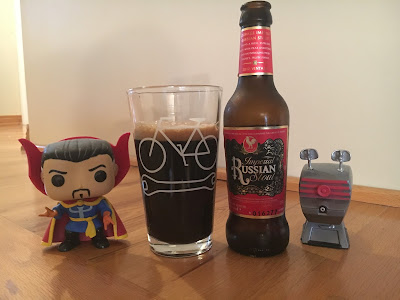