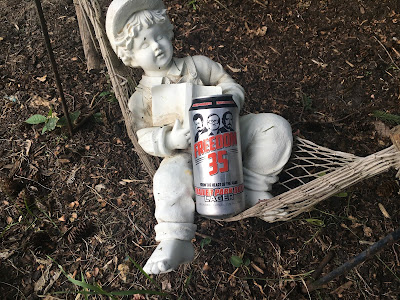 Three days into days off and not one bike ride has taken place yet. Yes, sad but some health issues have come up so all I can do is deal with it. Nothing serious, let's just say a bike saddle would be the worst possible thing right now. To start these days off it would appear my all nighter Fort Mac sleep deprived body won and after countless hours of sleep I still don't feel well rested.

Maybe it's because I need a bike to help me fully relax...

Double Tree Brewing from Guelph, Ontario (I think) these guys do not own a brewery yet and rent it off Wellington Brewery. Navigating their website was a pain in the ass but seeing as they are new to the industry I gave them a pass. Yet, once they grow I hope they do something about the terrible website they have.

We are not sure if Double Tree is behind this one, of course their crappy website told us nothing about it.

Our Canadian heros, the Trailer Park Boys teamed up with Double Trouble (we think) to create Freedom 35. A lager with the face of ricky, Julian and Bubbles on the can. Freedom 35 was a plan in the show to grow dope clans which they would turn into hash and sell to the prison guards for large sums of money. In the end, they would retire. Of course things would not go as to plan and mass pants pissing hilarity ensues.

We poured and a large uncontrollable head formed on top of this one. Once the head pourer was fired and out the door we started. A grainy smell helped facilitate some sort of starting to this one but between the bad website and shitty pour. I was uninspired. It was the Trailer Park Boys but still...

The first sip was what I expected. A bland boring beer. Is this what Bubbles and the boys would have wanted? Crap beer? I think their expectation level would have been higher but sadly this follows the same story that lots of other shows and bands do. They put out a beer and it's crap.

If you can find it, the nostalgic can is the best part about this one. 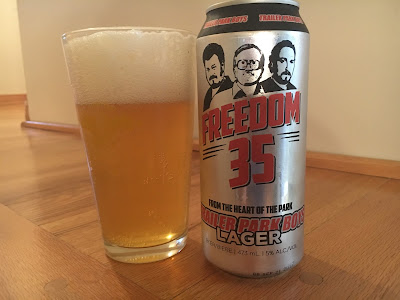