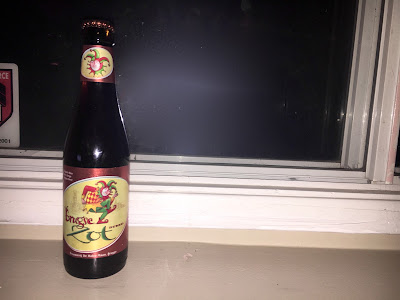 Back to another Friday beer posting, written on my first day off the bike after some pretty good rides. With lots of snow and blowing and blizzard like conditions I'm hoping tomorrows ride will be quite amazing. Although it will be hard to top yesterdays ride from Cameron Heights to Fort Edmonton. I should have ridden today but decided to clean up Lonebiker headquarters instead, aka the den, aka the beer testing headquarters.

Hence.. It was a very boring day.

De Halve Maan brewery I'm assuming comes from France. Just give me a second, I'll look that up on  my Google Mac machine. Is that even a thing? Probably. Who cares. Wow! Belgium. I was way off.. Well only about a country off cause France is right next door. With the French being so close it makes sense as I'm sure there is a big influence in Belgium. What does Belgium have to offer the world? Chocolate? Don't most of the european countries do that? *keep in mind kids, I have no idea what I'm talking about so just move on to the rest of the review and for the love of God, don't get offended!

It poured a burnt orange with a powerful head that literally blew one of the new interns head clean off due to the magnitude of the awesome. Give us a minute so we can clean this mess up. Ok, we are back. It was an impressive pour and now a nice touch of lacing sits on the top and sides from the head that was there. The beer head is what I'm talking about. We already removed the body from the beer lab.

Sorry about that. It's just what happens in the high paced world of beer reviews. The first few sips were not overwhelmingly amazing by any means. It felt empty and watered down on the first taste. I can get a citrus taste from this one. Other notes are of old toffee kept in a windowsill over a few weeks in July. In the end not incredible but not terrible. 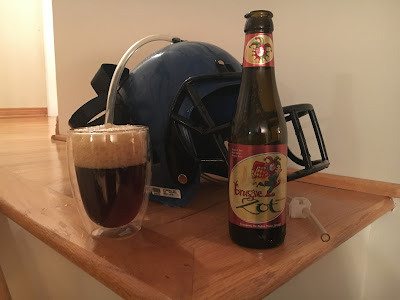