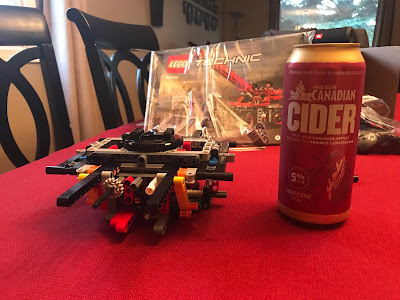 That was the call out on the Lonebiker employee radio to the masses involved with the Beer Friday operation. One by one they showed up at the door at the Beer Friday testing lab in their usual great spirits. These folks get pumped for Beer Friday and with testing being few and far in-between lately this was quite really the best way a Saturday night could have gone down!

"What in the actual Mcfuckballs is going on here!? A cider! I got excited and dropped my Tinder date for this!? A cider!?" Yelled one of the photographers from the back.

I calmed him down and the situation was tense for a few moments. After a few Bruce Lee kicks to the groin by yours truly to the millennial photographer he was willing to cooperate. Actually, you know something? Millennial's are a lot older than people think. They tap out at 37 (2018 year only of course.) Maybe it's the younger versions of millennial that everyone complains about. Most of the older ones are quite top notch. Ironically this photographer... 22.  And oh boy, did I go Ric Flair on him.

Yes a cider isn't a beer but they can be delicious. It was in the mod yard a couple years ago where I met a fine chap who drove me in the direction of these fine fermented apple juice beverages. I had promised to do more reviews of these but you know what? Delicious craft beer got in the way.

We poured and observed this cider from Molson Canadian. Canada's premier beer maker who are swiftly wanting to take over the cider market in Canada. It was golden and looked crisp and clean. Like a mountain stream, albeit a mountain stream stained with something to give it that light golden hue.

The first sip was quite nice. Although this would be something one would want to drink on their patio on a hot summer evening. It works on a cool September night as well. It does seem a bit watered down though. The apple is there and is fine. Oddly the last few sips were had and the watered down opinion has been thrown out the window.  No other notes worth mentioning. It is quite sweet though so you might want to stay away from having a couple in a row. 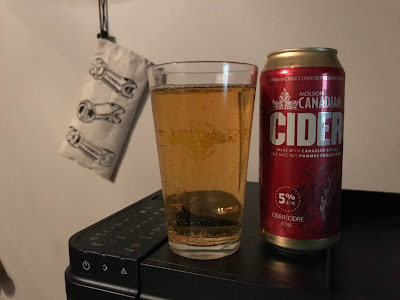