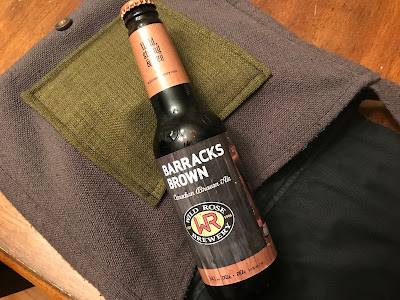 From the great foothills of Calgary we bring you Wild Rose Brewery. A brewery that prides itself on using all natural ingredients which was formed in nineteen ninety six making them twenty two years old. The year me and Mrs Lonebiker decided to start hanging out and I put the moves on her like a sultry James Bond.

Well.. Truth be told. She had to put the moves on me as I was a bit scared. Now though guys. I'm a regular Charles Bronson when it comes to making Mrs Lonebikers wildest dreams come true.

Well... Again, truth be told. between work and when I am riding bikes things can be a little... Wait a minute. This is none of your business! Why the hell am I typing this? I know we just laid off a bunch of people cause of the slow times but really...

Barracks Brown was poured into our trusty beer tester mug to the amusement of my Mother and pet bird (remember I said lay-offs? Things are tough right now.) and a darkened brown beer filled the glass armed with a strong two thick fingered head that would make any beer snob froth at the mouth. Hints of toffee and malts were a delight for the nostril. Tastes of dark chocolate mixed with coffee and toffee round it out. Hints of nuts seem to envelop the mouth as you swallow.

A very nice delightful beer to round out a Monday night beer write up for a work post. 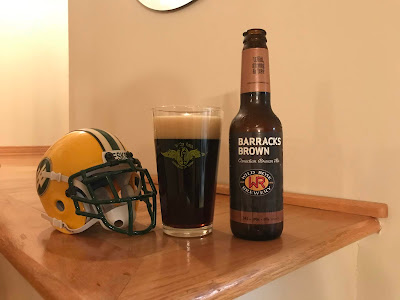