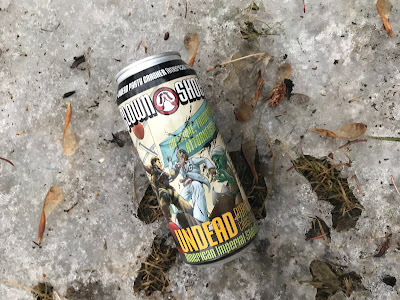 Beer Friday returns after giving the entire Beer Friday staff a month off with a free trip to Prague cause I'm a swell boss. The goal was for it to be a team building experience and one of the executives impregnated three interns. Whoops! Something was sure building up all right.

So we are back after firing the executive and all three interns cause I don't like funny games being played. Boston is the home of this one. Clown Shoes opened.... Well I don't know. Their website is still under construction much like you would see the internet in the mid nineties. Where everything internet was being fixed or built.

This dark one has a nice touch added to this one. Holy Water. Did I read that wrong or am I the victim of a cruel joke. Holy water? You serious Willis? Well adding Holy water is pretty freaking cool so kudos to the fine ladies and fellas over at Clown Shoes.

We poured and we were treated with a dark angry beer that flipped us the bird as we set up for a photo or two. That right there made me check the alcohol percentage and just as I suspected. Nine percent. Will this one mask out the high alcohol?

The first sip was had and instantly we learned that this one will be for those with acquired tastes. The copper three and a half fingered head tried to warn us this one would be different. After a few sips it did grow on me. Dark fruit with what tasted like molasses and dark chocolate rounded this one out. Lots of flavours come at you with this one. After a few sips for some reason I felt like I smoked a cigar.

This one is thick and sludgy just like the bitumen that dripped on me while working last set in the mighty north. It's not for everybody, careful with this one. This would be the perfect after cold weather winter bike beer. 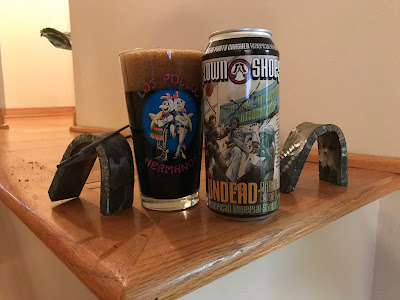