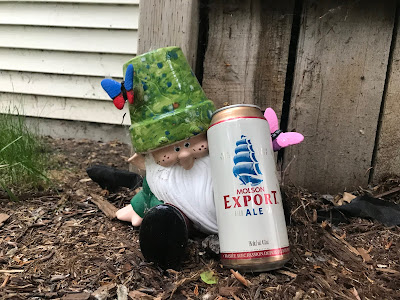 Greetings on a sort of wet evening in the Beaumont area. We are home with a rather serious leg issue. It does seem like I have issues all the time doesn't it? The kind folks at work reminded me of that notion and thinking back it would seem to be every year something comes up.

Do I blame old age? Probably. The issue now is most likely a sciatic issue which means leg pain. Well at times the leg pain was so intense I dropped while on shift at work. Not cool. Did I run back to my camp room like some pussy would though? Hell no! I stayed and did the job most likely injuring myself further and probably taking another year or two off my life. Cause that's what a smart person does! Working with tears in his eyes, injuring himself further making sure nobody sees...

So the good news. Well there isn't any. Other than a beer getting ready for it's time to shine. This newest injury could take a majority of the summer. Ouch.

Molson was established in Canada sometime a long time ago before we started ruling at hockey. Well actually I am pretty sure we ruled at hockey before Molsons and will rule at hockey long after it's gone. I mean.. The Stanley Cup is right now and look how many Canadians are on the teams.  Well, I'm only guessing but I can assume most are Canadian as they always are.

The pour went fine despite our lead pourer going too heavy and creating an unreasonable head. The person involved was immediately fired and sadly that part of the review is now inconsequential. A golden glorious lager awaited. Yes it knew it looked ridiculous with it's large head that was rudely given to him but he stood strong in the face of adversity.

The first sip was very much that of a regular ale. Tastes of light fruit and citrus are there. Things do seem watered down though. Not the fault of the beer, just the fault of the beer type. Or so I think.. This one would be a nice Sunday afternoon beer after you are done mowing the lawn. The grassy hops and earthy tones seem to comply with everything earth.

To close. This isn't an amazing beer by any stretch of the imagination. It is very Canadian and it features (taking a guess here) the Mayflower on the can. This beer has been associated with the Montreal Canadians and Alouettes from as long as I remember. Hell I think the Alouettes had it on their jerseys at one time before the world turned into a bunch of pussies. 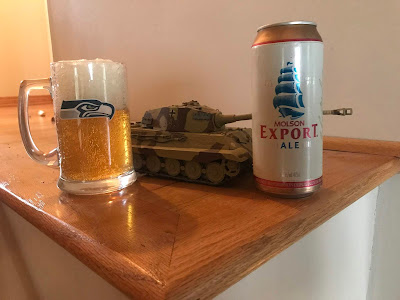