Happy Friday kids, well.. Thursday. After a rather rough week of work which where the weather made things quite the more terrible. If you are not from the area we had a wave of cold arctic weather that made us the coldest spot in the world for a day or two. -40 was a temp I remember lots were talking about but I'm not sure if anything ventured past -35 at ambient temps. The wind chill is a different story. So with that cold wave still lingering over us I started my days off by hiding in the house and will most likely do the same tomorrow.

So I'm terribly sorry for the lack of rides. The brethren members have caught wind of the top ten rides of the decade rumour (well, they just read the blog)  and the pressure to post this in the next little while is quite high. The good news is with the weather this is now happening. Lot's of research on posted rides through the whole catalogue are happening with posts being forwarded to the best and worst rides of the decade. I'm really hoping to have a few lists for the next set of work on Thursday. If we do get the top ten worst and best rides we will also be posting the best beers of 2019. Apologies for being late on the lists this year. The work rotations seem to get in the way.

Which brings us to this. Sea Change brewery which just opened in Beaumont is quite a refreshing change in a town that never really offered many meal or going out options other than Boston Pizza or Wild Wing. The few times we have been there it has been good. Today they offered me a new beer to try and I was so smitten with it I took one home which put the planned beer review on the back shelf.

The pour gave a clouded looking once golden coloured beer, the smell that came from the pour had the review team rather excited as a fruity essence floated through the room. If I didn't have this one earlier for dinner I would be quite intrigued right about now but being the customer for the second time in a night just had me excited. The first sip? Quite good. In fact, real good. It didn't have the same effect as I had in the restaurant but it was still quite beerly refreshing See what I did there? I invented a new word. Who's awesome?

For an IPA this doesn't murder you with bitterness. The bitterness is there but Sea Change did a great job by masking it with fruity goodness. Grapefruit and anything citrus are the mainstay of this one. It is quite full of flavour for an India Pale whom are normally just full of hops. Looking down at the murky beer whilst sipping combined with the amazing aroma had me in an almost euphoric state. Again... How is that taste? This is the newest offering from Sea Change and its a win. Sexy lacing runs down the glass as a brew infused with grapefruit and orange peel that doesn't taste like orange peel run down the throat.

A winner! Great way to start out the roaring twenties.

This beer gets 4 suds out of 5. Yay Beaumont! 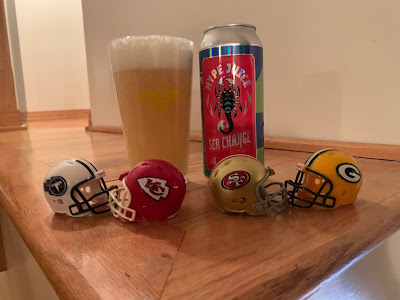